×
Tuesday - 08/03/2022 14:26
Nigeria, Senegal and Algeria have criticized Ukraine's efforts to enlist international fighters as it resists a Russian invasion. Analysts say those who have responded to the call need to reconsider.

Russia's war on Ukraine is barely two weeks old but Kyiv is already attracting potential foreign fighters from as far away as Kenya.

"If Ukraine decides to pay me a very good amount of money, which I know I cannot earn here, I will definitely go there and fight," Kimanzi Nashon, a student in the Kenyan capital Nairobi said.

"When we go there, and then the war ends before anything happens, I will come back to Kenya and be a millionaire," said Nashon.

Nashon isn't alone in harboring thoughts of being a hired fighter in Ukraine.

"If an opportunity presented itself for me to fight in Ukraine as a mercenary, I would be on my heels running there," Beatrice Kaluki, who is unemployed, told DW.

"I would rather die on the front line in Ukraine knowing that my family would be compensated even after my death, rather than die in Kenya from depression because of the insane unemployment rate!"

The 27-year-old said she believes other youth would run there [to Ukraine] if a chance presented itself because "they would rather die there fighting than die in this country from poverty."

Ukraine's call to all

They were reacting to Ukraine's President Volodymyr Zelenskyy, who last week called for like-minded people to come to his country's defense against Russia's invasion.

"African nationals might see an economic opportunity from participating in this conflict," Cummings told DW.

He said the reward could potentially come from being granted Ukrainian citizenship or being provided some form of financial compensation for participating in the conflict on behalf of Ukrainian forces.

However, African countries have come out strongly to condemn Ukraine's call for African fighters to join the "international legion" against the Russian invasion.

Nigeria on Monday issued a warning on Twitter to its citizens that it would not tolerate any recruitment of mercenaries to fight alongside Ukrainian forces against Russian troops.

A spokespersonf or Nigeria's foreign affairs ministr, Francisca Omayuli, said Nigeria would not allow its nationals to volunteer as mercenaries. Omayuli also said that the Ukrainian Embassy in Nigeria had refuted local Nigerian media reports that it was demanding money from Nigerian volunteers. “The Embassy ... dissociated itself from the claim that it is requesting $1,000 (€917) from each Nigerian volunteer for air ticket and visa,” Omayuli said. According to the Nigerian daily, The Guardian, last week more than 100 young men registered their interest in fighting for Ukraine at the country's embassy in Abuja.

Senegal has also expressed its displeasure with Ukraine's government, saying that at least 36 people in Senegal were ready to confront Russian forces.

DW tried to reach some of the volunteers but was unsuccessful.

Senegal's Ministry of Foreign Affairs said that it was astonished to learn that the Embassy of Ukraine in Dakar had posted an appeal on its Facebook page for foreign citizens to come to Ukraine's military defense.

In a statement, the Senegalese government criticized the initiative and warned its citizens that recruiting volunteers, mercenaries, or foreign fighters on Senegalese soil is illegal.

Although Ukraine's Embassy in Senegal has since deleted the Facebook post, the willingness of some young Africans to fight in Ukraine raises questions about their profiles and motivations.

"These young people who want to get involved [in Ukraine] have not fully considered political or religious implications," said Serigne Bamba Gaye, a researcher on peace, security and governance at the US-based Peace Operations Training Institute (POTI).

"They are only interested in answering a call without perhaps understanding the issues surrounding the Ukrainian conflict," Gaye said. 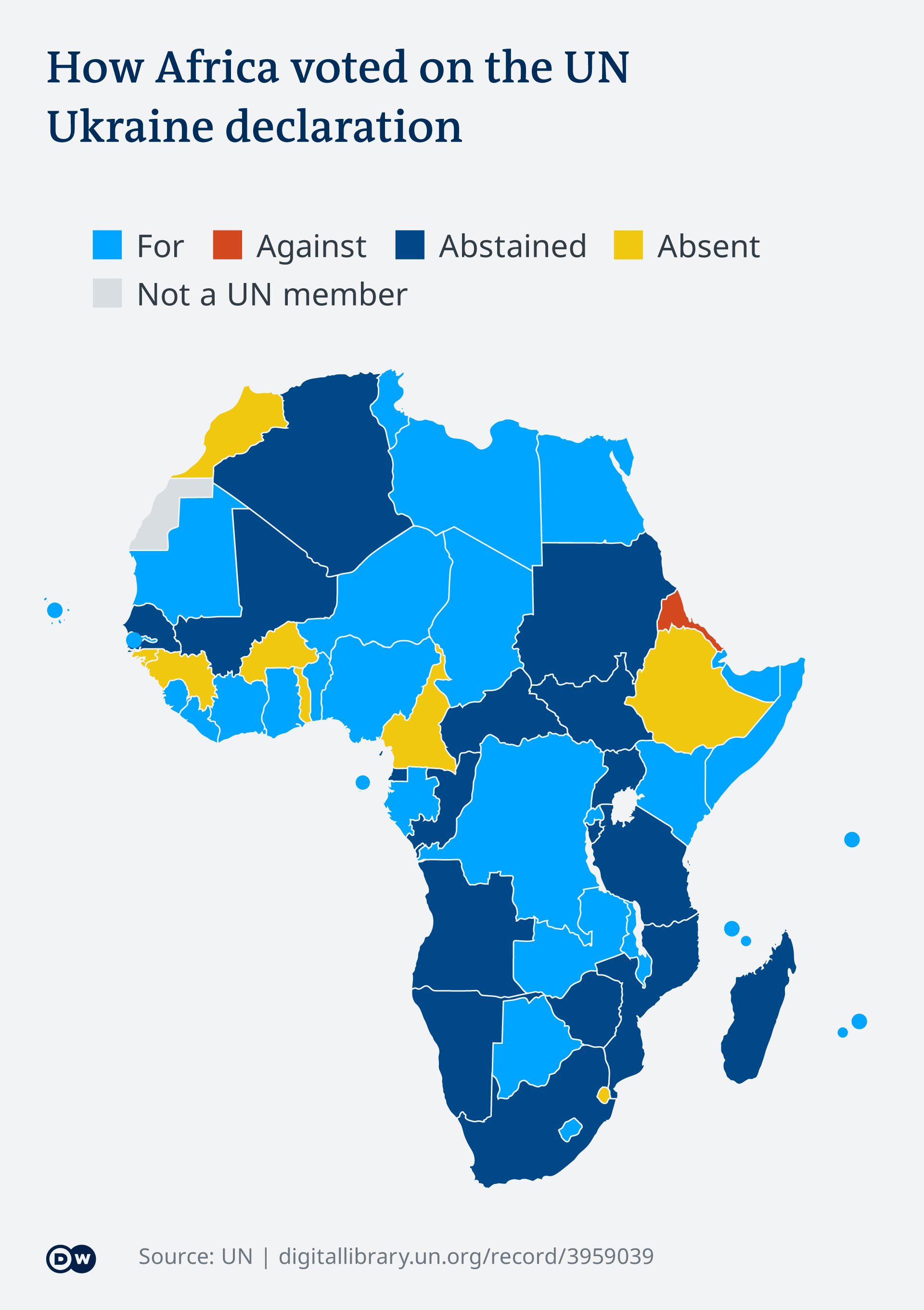 Senegal, which shares extensive political and military ties with Russia, was one of 17 African countries that abstained from voting on the March 2 UN resolution condemning Russia's aggression and calling for an end to the fighting.

Algeria, another client of Russian military hardware, also called on Ukraine to desist from trying to enlist fighters from its country. Its government, too, has remained silent over Russia's invasion of Ukraine.

"For the past 20 or 30 years, we have seen many recruiters who recruit young Africans to take them to play the role of mercenaries," Gaye said, adding that the prospect of economic gain easily lures young people.

"The other element that seems important to me is the social [media] networks that make any cause today have a global dimension. A country needs support, so we're going to go there."

Social media has turned into a battlefield between those who back Ukraine and those for Russia.

Sorry, but we can't stay silent on this one, it's just far too cynical. What 🇷🇺 is doing in 🇺🇦 is slaughtering innocent children, women and men for its own gain. It's definitely not "fighting Nazism". Shame on anyone who's falling for this. (Sadly, we're kinda experts on Nazism.)

For security and risk analyst Ryan Cummings, African countries need to consider the implications of allowing their citizens to travel to Ukraine as hired guns.

"Russia has stated any country that is actively assisting Ukraine in this war, or as Russia calls it: 'a special military operation to demilitarize and de-nazify Ukraine,' will be considered at war with Russia," he said.

He warned that the Kremlin could also retaliate by ending diplomatic relations with African countries that support Ukraine.

Andrew Wasike and Carole Assignon contributed to this article.