×
Tuesday - 08/03/2022 12:13
Sanctions on Russia have all but collapsed its economy. If the same sanctions were placed on China, it would be disastrous and extreme.

Naturally, as Russia invades Ukraine, we are all preoccupied with the suffering of its people. But there is another important long-term dimension to the conflict which offers a glimpse of a brighter future.

The Ukraine war is most likely going to be contained within its borders. Either Russian President Vladimir Putin will find an acceptable off-ramp before too long because the Russian economy is collapsing under pressure from Western sanctions, or he will persist and occupy Ukraine, which will result in an endless Western-sponsored insurgency that bleeds Russia dry for its duration.

What’s positive about that?

The answer does not lie in Europe at all. It lies much closer to Australia. In Taiwan, to be precise.

What does Ukraine have to do with Taiwan?

It is well-documented that a Sino/Russian alliance of sorts has developed in recent years. Beijing was well aware in advance of Russia’s intentions in Ukraine and is even rumoured to have requested that the invasion date be delayed to accommodate the Winter Olympics.


That simpatico between Moscow and Beijing has a more salient purpose regarding Ukraine in the long run. Beijing will be watching events unfold with keen interest to judge how it might affect its own plans for reunification with Taiwan.

In particular, Chinese military planners will be monitoring the extent, force, and cogency of the Western responses so that they can measure what might happen if it were to eventually invade its own neighbour.

That is where Australia and other liberal democracies can see a ray of light for the future in the wider world than Ukraine.

As war in Ukraine started, Europe and the US were more divided than at any time since WWII. The legacy of a brash Donald Trump, as well as years of American foreign policy misadventure, plus decades of differences over climate change, had driven a wedge into trans-Atlantic relations and NATO.

Russia may have calculated that fissure was sufficiently wide that were it to press Ukraine, NATO would split in twain. Russia had spent many years cultivating Europe as its largest energy customer, proving itself reliable through many trials. And, amid climate change reforms, plus the wind-down of the use of nuclear after the Fukashima disaster, Germany and Italy in particular became dependent on Russian gas to keep the lights on. 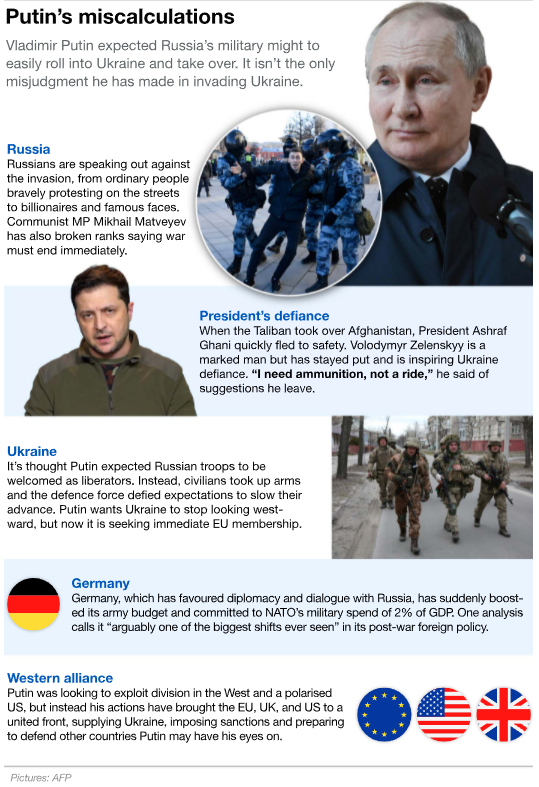 Russia may have calculated that this dependence would prevent Germany from endorsing NATO action in response to Ukraine. But it has backfired. The West has responded aggressively as a coherent unit, both economically and militarily.

The Russian economy is under immense pressure as a monetary embargo threatens the solvency of its banking system, non-energy trade collapses, and possibly oil and gas as well.

This has foreshortened the period that the Russian elite can afford to press forward in Ukraine as the suffering of its own people grows exponentially.

As well, Russian energy to Europe will henceforth be systemically substituted with US gas, accelerated renewables and other sources within the Western sphere of influence, further consolidating the liberal bloc.

The outcome is so disastrous for Russia economically that one might ask, would Russian President Vladimir Putin have pressed forward at all had he known the consequences?

This is where we turn back to China and Taiwan. If you think what the West has done to the Russian economy is impressive, just imagine the kind of carnage it could inflict upon the Chinese if it invaded Taiwan?

China is extraordinarily reliant on the global economy to fuel, feed and employ its people. It is the largest consumer of commodities on Earth by far. And these could be blockaded.

It is the largest exporter of goods globally. And these could fall prey to a global backlash by consumers and governments alike.

It has the largest forex reserves of any nation by far, the vast bulk of which are kept in Western assets. And these could be frozen.

If the West was to respond to China in a Taiwan invasion in the manner that it has to Russia over Ukraine, the Chinese Communist Party would face an existential crisis at home so extreme that the last thing on its mind would be winning back Taiwan.

Sure, we’d likely suffer as well. But nowhere near as much. We’d re-industrialise in time and form new supply chains with an American-protected South-East Asia.

On the other hand, China could damn near collapse. The Communist Party could face catastrophe. And the dreams of Chinese regional and global hegemony could disappear.

Given any Taiwan war has a much higher chance of spilling over into a pan-Asian and even global conflict than the conflict in Ukraine does, we should all be making it clear to China that if it wants to take a martial punt on Taiwan then the consequences for those in charge will be grave.

That’s the message that the Ukraine theatre is now delivering to Beijing. The West should reiterate the same at every available opportunity.

David Llewellyn-Smith is Chief Strategist at the MB Fund and MB Super. David is the founding publisher and editor of MacroBusiness and was the founding publisher and global economy editor of The Diplomat, the Asia Pacific’s leading geopolitics and economics portal. He is the co-author of The Great Crash of 2008 with Ross Garnaut and was the editor of the second Garnaut Climate Change Review.