×
Friday - 04/02/2022 13:01
US authorities have accused Russia of planning a shocking stunt designed to pave the way for a brutal, violent invasion of Ukraine.

Russia is planning to create a “very graphic propaganda video” showing a fake attack from Ukraine in order to justify a looming invasion, US officials have claimed.

Tensions between the two nations have been mounting for months, with Russia massing an estimated 100,000 troops and tanks along borders in recent weeks.

Nations around the world have introduced sanctions against Russia in the hope of deterring an attack, with White House press secretary Jen Psaki previously stating the Biden administration was convinced war was “imminent”. 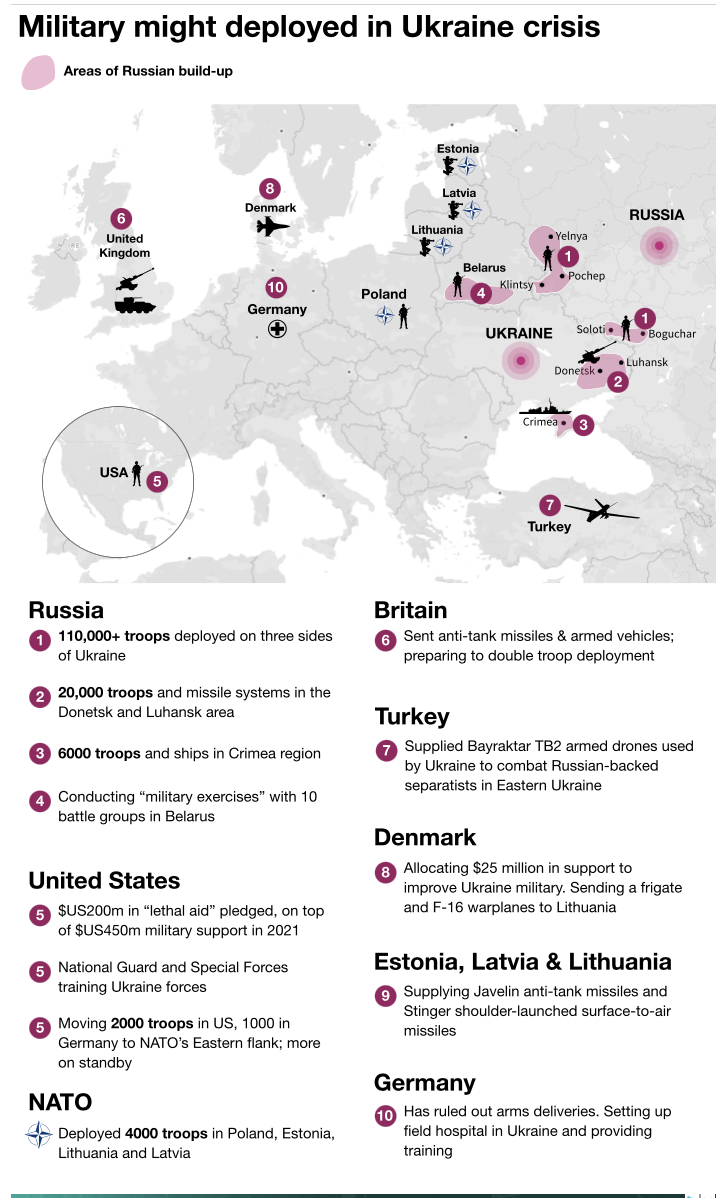 Now, the conflict has taken a new turn, after press secretary John Kirby told a Pentagon briefing that intelligence suggested Russia “is planning to stage a fake attack by Ukrainian military or intelligence forces against Russian sovereign territory or against Russian-speaking people”.

“As part of this fake attack, we believe that Russia would produce a very graphic propaganda video which would include corpses and actors that would be depicting mourners and images of destroyed locations, as well as military equipment at the hands of Ukraine or the West, even to the point where some of this equipment would be made to look like it was Western supplied … to Ukraine equipment,” he said.


He said the video would be used to “fabricate a pretext for an invasion” of Ukraine.

An unnamed senior insider told CNN the US understands Russia has already lined up actors and that the video could feature images of Bayraktar drones, which Turkey had given to Ukraine, “as a means to implicate NATO in the attack”.

The official said the clip, which could depict a violent explosion with multiple casualties, would “be released to underscore a threat to Russia’s security and to underpin military operations” and “could provide Putin the spark he needs to initiate and justify military operations against Ukraine”.

But Russia has denied the allegation, insisting it was not planning a so-called “false flag” operation.

It comes days after it emerged that Russia has moved blood supplies to the border in what was seen as a chilling sign that Moscow was preparing for bloodshed.

Reuters broke the news last weekend, after three US officials claimed the blood supplies were intended to treat the future wounded, which indicated Russia was “clearly” ready to make a move.


The claim was backed up by CNN, with two “senior US defence officials” telling the network the blood was organised by Russia as part of its preparation for a potential invasion.

However, one source said while the blood supplies alone were not proof, the supplies coupled with other indicators suggested Russia was seriously beefing up its capabilities.

Meanwhile, the Ukrainian government previously hit back at the blood supply claim as the nation continues to minimise war talk in an apparent bid to protect Ukraine’s economy from the impact of war panic.

“This information is not true,” Ukraine’s Deputy Defence Minister Hanna Maliar posted in a statement on Facebook in response to the blood supplies allegation.

“Such ‘news’ is an element of information and psychological warfare. The purpose of such information is to spread panic and fear in our society.”


But a White House official told CNN that Ukraine’s contradictory actions were potentially dangerous, as it meant the nation was not properly prepared for any action.

“We understand the difficult position (Ukrainian) President (Volodymyr) Zelensky is in and the pressure he’s under,” the official told the network.

“But at the same time he’s downplaying the risk of invasion, he’s asking for hundreds of millions of dollars in weapons to defend against one.

“We think it’s important to be open and candid about that threat.”