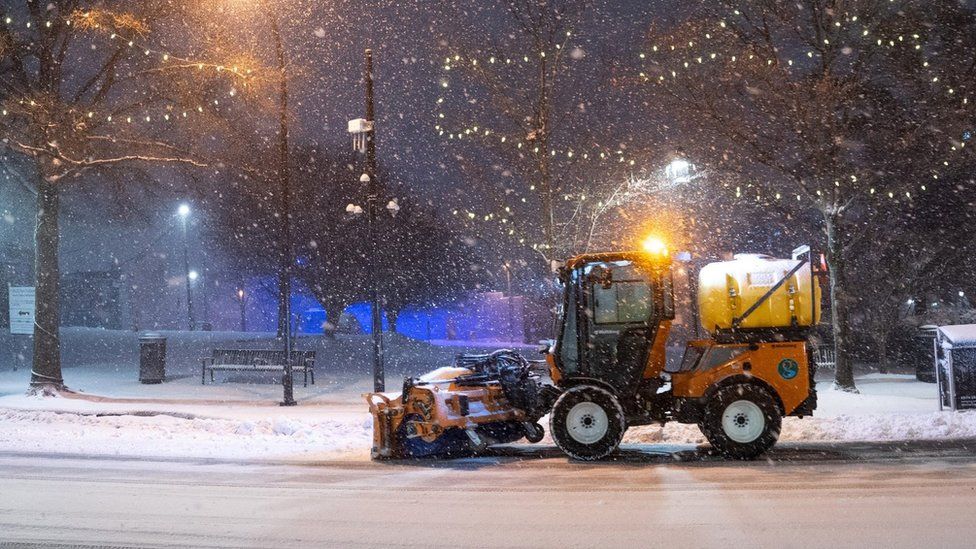 GETTY IMAGES | A snow plough at work in Greenville, South Carolina
A winter storm is bringing heavy snow and ice to parts of the US and Canada, with millions under weather warnings.


Thousands of flights have been cancelled, and power cuts have been reported in some south-eastern states.

The US National Weather Service (NWS) said the storm would hit much of the eastern third of the country over the next two days, with more than 1ft (30cm) of snow expected in some areas.

The huge storm system is approaching the eastern US from the Midwest.

Snow and ice could result in "dangerous travel, power outages, and tree damage", the NWS warned.

There were also forecasts of possible coastal flooding in some areas, including New York city and parts of Connecticut, with warnings that roads and infrastructure could be affected.

In Canada's Ontario province, which shares a border with New York state, Environment Canada issued storm warnings on Sunday morning for much of the south, where the snow is expected to start late on Sunday local time. Toronto, the capital of the province and Canada's largest city, is forecast to get seven inches (20cm) of snow.

US airlines had cancelled at least 2,400 flights by Sunday morning as a result of the extreme weather, according to flight tracking data.

Charlotte Douglas International Airport in North Carolina was among the worst hit, with almost 90% of flights scrapped, and a message on its website urged passengers to check with their airlines before travelling to the airport.At a news conference in the neighbouring state on Saturday, South Carolina Governor Henry McMaster called on residents to stay off the roads.

"This is going to be a pretty bad storm in the upper part of the state," he said, adding that it was "good news" that the storm was forecast to hit on a weekend and on a public holiday on Monday, when fewer people would need to travel.

"Hopefully, the storm will underdeliver, but it could overdeliver. We just don't know," Georgia Governor Brian Kemp said as he announced preparations for his state.