A fire started at the Zaporizhzhia plant after it was shelled by Russian troops, Ukrainian officials say.

The UN's nuclear watchdog said radiation levels and the safety of reactors were not affected.

US President Joe Biden urged Moscow to stop its military activities around the site, while Canada's Prime Minister Justin Trudeau said the "horrific attacks" from Russia "must cease immediately".

UK Prime Minister Boris Johnson said the "reckless" attack could "directly threaten the safety of all of Europe". All three leaders spoke to Ukraine's President Volodymyr Zelensky by phone.

Mr Zelensky, meanwhile, said the attack could have caused destruction equal to six Chernobyls, the site of the world's worst nuclear disaster in 1986.

"If there is an explosion, it is the end of everything. The end of Europe," he said. 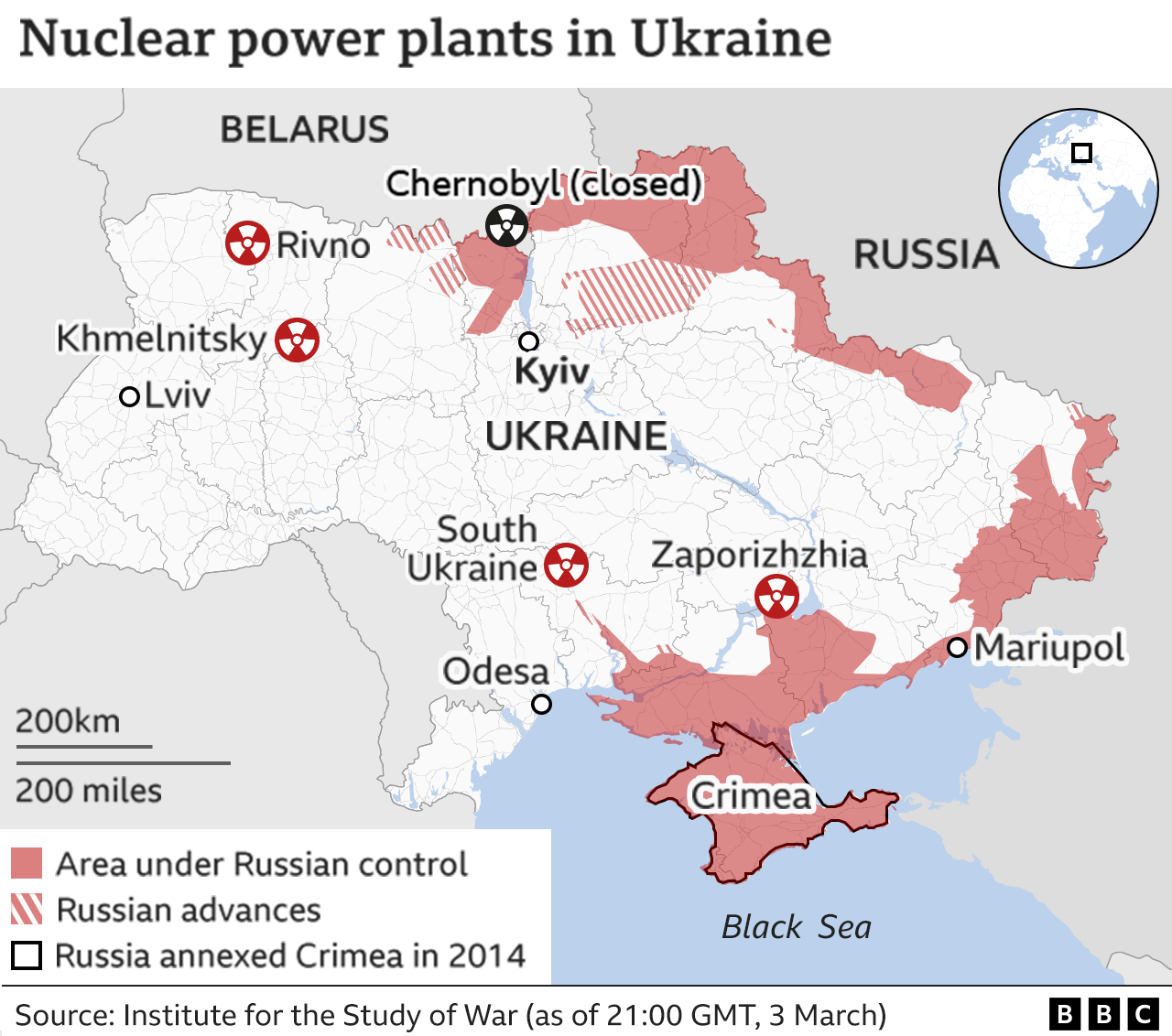 A video feed from the nuclear plant showed blasts lighting up the night sky and sending up plumes of smoke.

A building within the plant site was set on fire after being hit by a projectile but was not part of the reactors, according to the head of the International Atomic Energy Agency, Rafael Grossi.

He said safety systems at the plant were not affected by the fire and that there has been no release of radioactive material.

He described the situation at Zaporizhzhia as "normal abnormality", meaning operations are normal but nothing else is.

Earlier, the IAEA said it was in "full 24/7 response mode" due to the "serious situation" at the power station.

One resident who lives nearby said he saw the Russian military attacking the site. "It is just terrorism... It is worrying not just for our region, but for Ukraine and for the world," Kirill Dovzhik told the BBC.

Ukrainian emergency services said they were initially blocked from getting to the scene of the blaze, prompting President Biden to publicly call on Russia to allow firefighters into the site.

Boris Johnson said he would seek an emergency meeting of the UN Security Council on Friday over the attack.

It appears that only one of six reactors at the plant is now operating.

Corkhill says the reactors are being taken "offline" which means "they're shutting down the nuclear reaction and putting them into a safe and stable state".

"If you want to target their power supply, you attack a building close to the power plant and force operators to shut it down," she says.

Corkhill adds that a "worst-case scenario" would be that the plant's electricity supply were damaged as "we could be looking at a scenario similar to what happened at Fukushima in 2011, where a loss of power led to a loss of cooling, which caused a meltdown of three of its nuclear reactors".

The plant, located around 550km (342 miles) south-east of the capital Kyiv, generates around 20% of all electricity in Ukraine. It lies on the river Dnieper, north-east of the city of Kherson which is said to have been occupied by Russian forces.

The Russian military has also seized control of the Chernobyl nuclear plant, the site of the worst nuclear disaster in history.

News of the latest incident at Zaporizhzhia caused share prices in Asia to fall sharply.

More than one million people have fled Ukraine since the invasion began last week.

Despite punishing international sanctions, Russia's President Vladimir Putin said his offensive was going "strictly according to schedule, according to plan".

He has put his nuclear forces on high alert because of "aggressive statements" by the West.

Western ministers will hold crisis talks in Brussels on Friday as they seek to show their support for Ukraine.

UK Foreign Secretary Liz Truss called it "one of the biggest days of diplomacy" with allies prepared to "tighten the vice around Putin's war machine" by targeting the Russian economy with more sanctions.

Blinken calls on Moscow to end blockade of Ukraine ports as Medvedev says Russia is ready to allow...