×
Sunday - 13/02/2022 10:36
Gas reserves are running low, and Europeans could soon face the prospect of freezing to death. Now, their fate rests in the hands of Vladimir Putin.

It’s the middle of winter. Gas reserves are running low. Soon, many Europeans could face the prospect of freezing to death.

Now their fate rests in the hands of Vladimir Putin.

Many of Europe’s nuclear plants have been decommissioned. Most of its oil and gas reserves have been depleted. And that’s left the economic union dangerously exposed.

As Russia’s forces move on the border with Ukraine, fears are rising war could throttle economies and lives far beyond the combat zone. 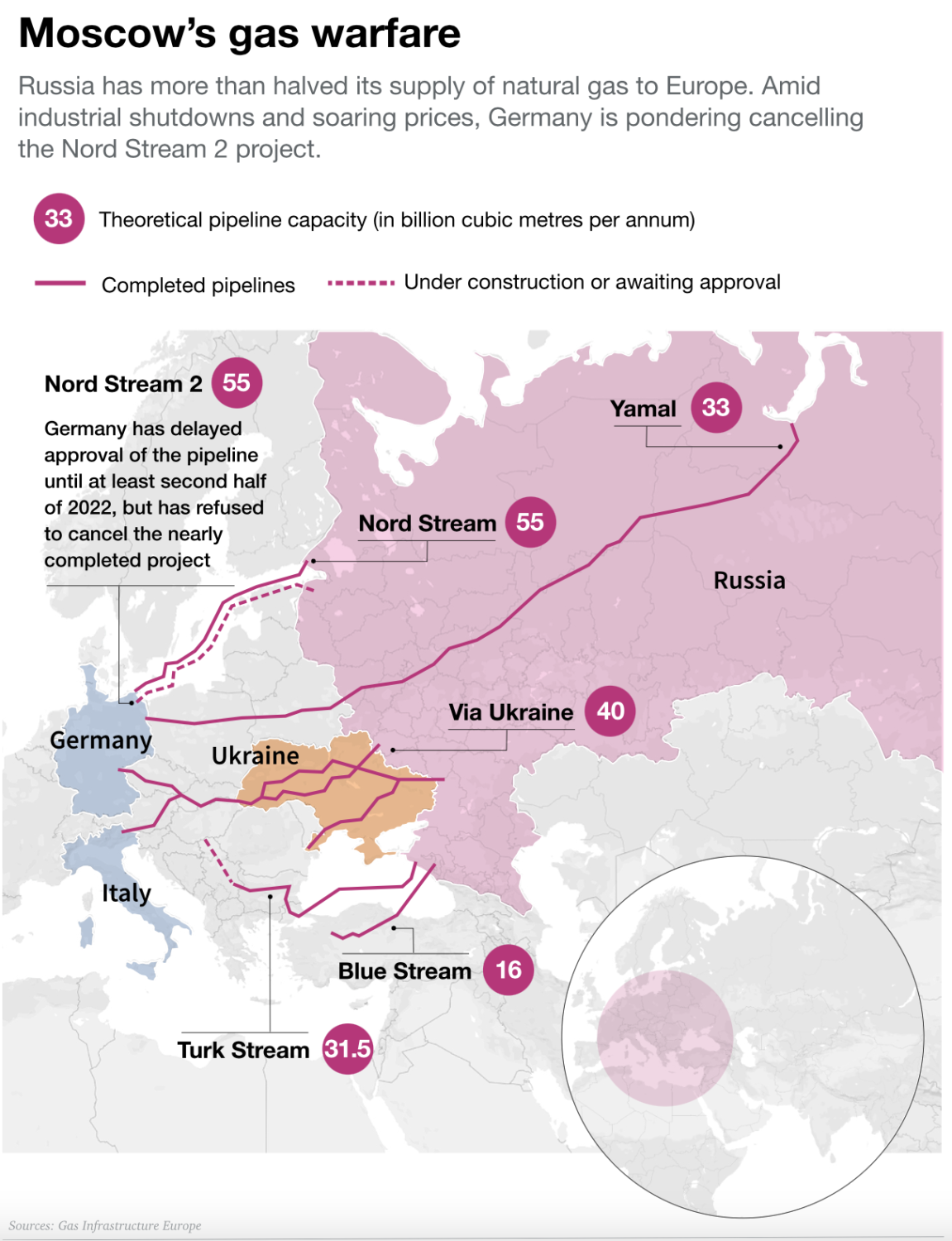 It’s a high-stakes game Putin has already begun to play.

His Kremlin is demanding sweeping concessions from NATO and the United States. It wants Ukraine barred from the military alliance. All former Soviet Eastern Bloc states must be evicted.

Backing these demands are 140,000 troops and their tanks, artillery and combat aircraft.

The Kremlin-run gas company Gazprom has already cut natural gas deliveries by half. But it’s done so while sticking to the literal letter of its supply contracts.

On Thursday, Germany declared its reserves had fallen to “worrying” levels.

Its remaining stockpile won’t survive a week of extreme cold. And all of Europe’s been left contemplating months of freezing weather without heat.

That gives Putin a lot of leverage.

Once the snow begins to thaw, his power to coerce will wane.

European natural gas prices recently topped $US60 per million Btu. In comparison, that’s about $US350 a barrel when oil costs $90.

There’s little sign of Russia releasing extra supplies to the spot market, as Europe has come to expect. And all its contractual obligations have been met.

Then there’s China and Iran. Both are among the world’s largest producers. But Europe’s relationship with these authoritarian states – like Russia – is strained.

Australia is the world’s biggest LNG exporter. But most of its output is already accounted for.

This is why LNG tankers worldwide are changing course towards the North Atlantic.

“We’ve been working very closely with Germany and with Europe to surge capacity from other parts of the world — from Europe, from North Africa, the Middle East and Asia — and we think we’re prepared to compensate for any shortfalls that might materialise,” says White House deputy national security adviser Daleep Singh.


President Joe Biden has asked US producers to increase output and send all they can spare. Qatar has been approached to ramp up production. Japan has volunteered to redirect everything it doesn’t need for itself.

But Europe has only limited ability to accept delivery.

LNG tanker traffic has doubled over just the past year. It now matches Russia in providing 40 per cent of total European supplies.

But Europe has only 28 LNG import terminals. Positioned chiefly in Western Europe, they are already operating at almost maximum capacity.

Central and Eastern Europe are used to getting gas by pipe. From Russia. Through Ukraine.

“Energy prices have eased in recent weeks, but only because Europe has been lucky with the weather,” says Columbia University Centre on Global Energy Policy director Jason Bordoff.

“Winter temperatures have not been as cold as feared. The same has been true of Asia, allowing Europe to draw some cargoes of LNG that otherwise would have been needed there.”

President Putin’s gamble may hinge on how the weather plays out in the coming weeks.

This week, the German ministry for the economy and climate told a press conference it was “monitoring the situation of storage levels, and it is certainly worrying.”

This may explain why Chancellor Olaf Scholz has been reluctant to openly throw his weight behind Ukraine.

In a visit to the White House earlier this week, Russia’s controversial new Nord Stream 2 gas pipeline was critical in discussions with President Biden.

The pipeline, which bypasses Ukraine to deliver its gas to Germany, is complete.

But it’s not yet operational.

Berlin has been hesitant to certify its status.

For years the project has been the centre of international debate. The US – and others – have warned it would only increase Europe’s dependence on Russia.

Now, Putin’s belligerence has proved this.

President Biden has said he would “end” the Nord Stream 2 project if Russia invades Ukraine.

Chancellor Scholz has only said, “all options are on the table”.

The exposure of other European countries to Russia’s gas coercion is varied.

Sweden uses very little gas. The UK gets its supplies from elsewhere.

But others – especially those in Central and Eastern Europe – are almost totally reliant on Moscow.

“If relations get very ugly, as now seems quite possible, then quite a lot of Europe may be in for a very cold and a very expensive winter,” says former British ambassador to NATO Adam Thomson.

What if Russia turns off the tap?

It’s not the first time the Kremlin has played this game.

It closed the pipeline that passes through Ukraine to Western Europe in the winter of 2009. Moscow’s excuse was a dispute with Kyiv over transit fees.

Any invasion of Ukraine would cut off this supply.

And Moscow could point to Nord Stream 2 as an alternative source.

This economic and diplomatic crisis has been a long time coming, says retired US Army General and national security adviser H.R. McMaster.

“The fact that they are dependent on Russian gas has given Vladimir Putin tremendous coercive power over Europe’s economies,” he said.

Many European industries have long shut down their furnaces. And governments are moving to reduce the impact on families as prices continue to soar.

Many expect it to get worse.

“I think in the event of even a less severe Russian attack against Ukraine, the Russians are almost certain to cut off gas transiting Ukraine on the way to Germany,” says former US diplomat and sanctions co-ordinator Dan Fried.

Moscow would likely offer to make up the shortfall – if Berlin allowed Nord Stream 2 to open, and other conditions were met.

But Berlin is in a precarious position.

“If Russia invades Ukraine, one way or another, Nord Stream 2 will not move forward,” vowed US national security adviser Jake Sullivan at the weekend.

“There is no way for Europe to fully offset an outright cessation of Russian gas exports,” says Centre for Strategic and International Studies analyst Nikos Tsafos.

“The system cannot cope with a destruction of that magnitude.”