"You laugh and cry with us and, most importantly, have been there for us, for these 70 years," Charles said.

He added serving the public was what "gets my mother up in the morning" and thanked her on behalf of the world.

The final day of the Jubilee celebrations on Sunday will end with a huge pageant near Buckingham Palace.

The Platinum Jubilee Pageant - a carnival procession up The Mall featuring giant puppets and celebrities - will depict key moments from the Queen's seven decades on the throne.

Street parties are also set to be held across the UK in what is being called The Big Jubilee Lunch.

The Queen did not attend Saturday's concert, but she opened the show appearing in a recorded sketch with Paddington Bear.

Smiling and laughing at her tea table, she opened her handbag to reveal that she kept a marmalade sandwich in it - the famous bear's favourite snack.

Prince William also spoke at the event, focusing on his family's record of raising concerns about the planet and his optimism people would unite to protect it.

The star-studded concert saw 22,000 people fill The Mall to see performances from an array of music artists, as well as appearances from the stars of stage and screen, and the sporting world.

There were performances from the cast of Lin-Manuel Miranda's Hamilton and several of Andrew Lloyd Webber's musicals, as well as a song from Six, the West End show about Henry VIII's wives.

There was also a run through of British and Commonwealth sporting achievements by actor and rapper Doc Brown. The crowd also heard Italian tenor Andrea Bocelli sing Puccini's Nessun Dorma.

Looking on were more than 30 members of the Royal Family. Harry and Meghan, whose daughter Lilibet turned one on Saturday, did not go.

The two-and-a-half hour show was opened by the group Queen and Adam Lambert, with guitarist Brian May appearing on the Victoria Memorial monument, 20 years after he famously performed on the palace roof for the Golden Jubilee concert.

The show was closed by Diana Ross, with her first live performance in the UK in 15 years.

Taking to the stage, Prince Charles remarked on what he said was an "outpouring of warmth and affection over the Jubilee weekend".

"On behalf of us all, I wanted to pay my own tribute to your lifetime of selfless service."

He went on to talk about the Queen's "strength and stay", his father, the Duke of Edinburgh, who died last year. He said he was sure he was there in spirit.

"My papa would have enjoyed the show and joined us wholeheartedly in celebrating all you continue to do for your country and your people," he said.

He went on to say that the Queen continued to make history - and had made the Commonwealth an important force for good. "And there was still time for fun amongst the work," he added.

She had pledged to serve her whole life, and she continued to deliver, he said.

"You have been with us in our difficult times. And you bring us together to celebrate moments of pride, joy and happiness," he said.

As pictures of the Queen throughout her reign were projected on to the front of Buckingham Palace, he said: "These pictures on your house are the story of your life - and ours.

'Harness the best of humankind'

The Queen's grandson, Prince William, spoke at the event during a section of the show dedicated to environmental issues.

It opened with words from Sir David Attenborough, and as images of the natural world were projected on to Buckingham Palace and music from Hans Zimmer was played, the crowd heard archive audio of the Queen speaking about the future of the planet in 1989.

Prince William, who champions environmental issues, said that throughout the Queen's lifetime, the natural world had become more fragile.

The Queen had spent decades making the case for taking better care of the world, he said, and restoring it has never been more urgent.

"Together, if we harness the very best of humankind, and restore our planet, we will protect it for our children, for our grandchildren and for future generations to come," he said.

This was a deeply personal speech by Prince Charles - addressing "mummy".

It was intimate and simple, despite the grand setting. It was a son thanking a mother who had persevered for 70 years rather than a speech commending a head of state.

It was also a reminder of how long Prince Charles and the Queen have been there together, soldiering on side by side. This is also the 70th anniversary of Prince Charles becoming heir to the throne.

In this family moment he remembered his "papa", the Duke of Edinburgh, who died last year.

If Prince Charles was looking back on changes over 70 years, Prince William was looking forward, with a rallying cry for the conservation work that is close to his heart.

In the London twilight, it was framed as a message of hope. Invoking the Queen, he said: "Like her, I am an optimist."

Earlier in the day, the members of the Royal Family spent the day at events across the UK.

Prince William and his wife the Duchess of Cambridge met performers and crew ahead of a special show in Cardiff.

Princess Anne represented her mother at the Epsom Derby where Zara Tindall, the Queen's granddaughter, said the Queen would be tuning in from home.

"She'll be sat on the sofa watching the TV. She'll be in her comfy clothes," she said.

The Queen missed Derby Day, and a service of thanksgiving on Friday, because of mobility issues. 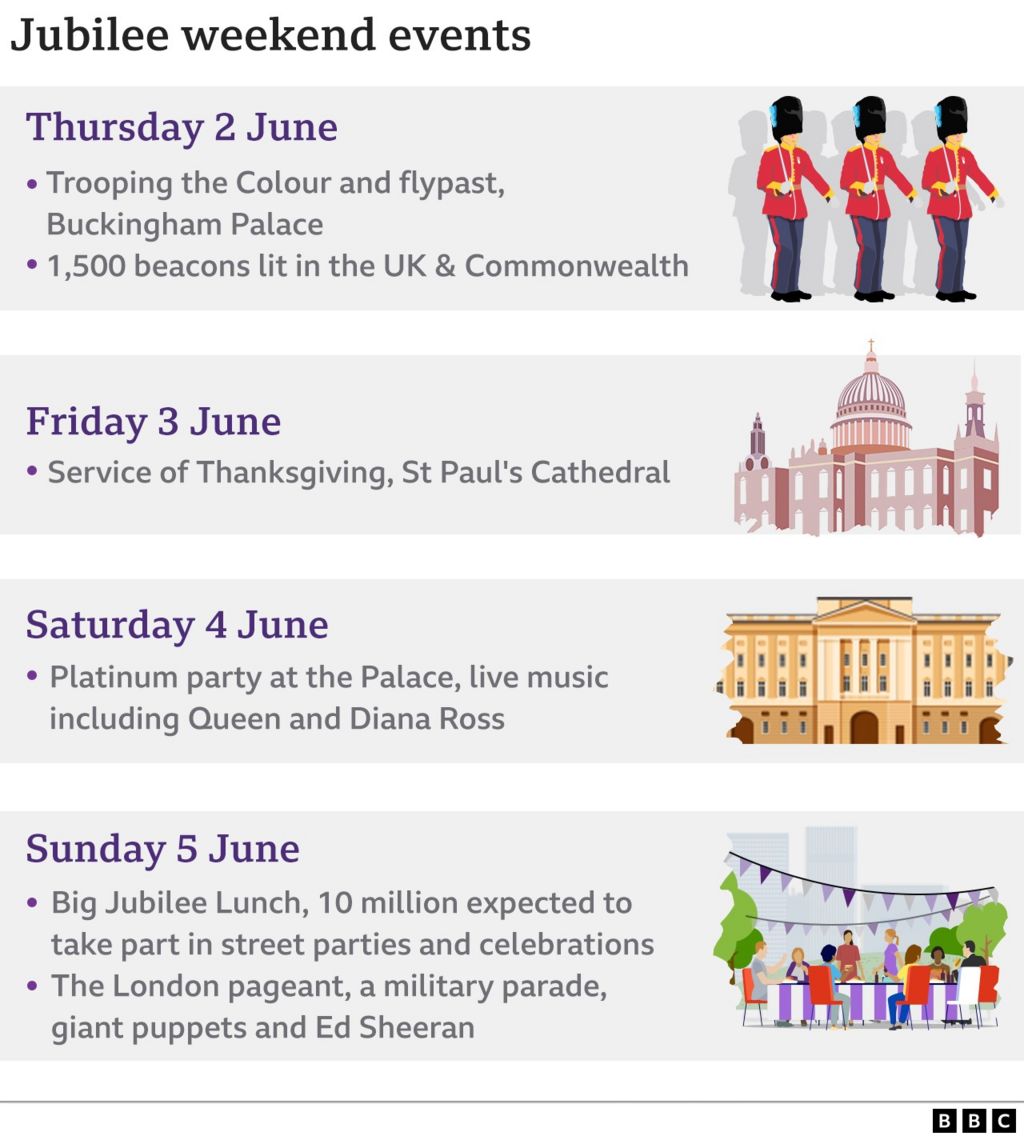