×
Sunday - 20/02/2022 16:30
US intelligence has revealed Russian President Vladimir Putin has ordered his troops to invade Ukraine, with the army ready to strike.

Vladimir Putin has given the order for his troops to invade Ukraine, with the Russian army now poised to strike.

That’s according to US intelligence, which has revealed about three-quarters of Russia’s total forces have been deployed against Ukraine.

Insiders with knowledge of the unfolding crisis told US news outlets that the sheer number of troops now massed close to Ukraine indicates an attack could be imminent. 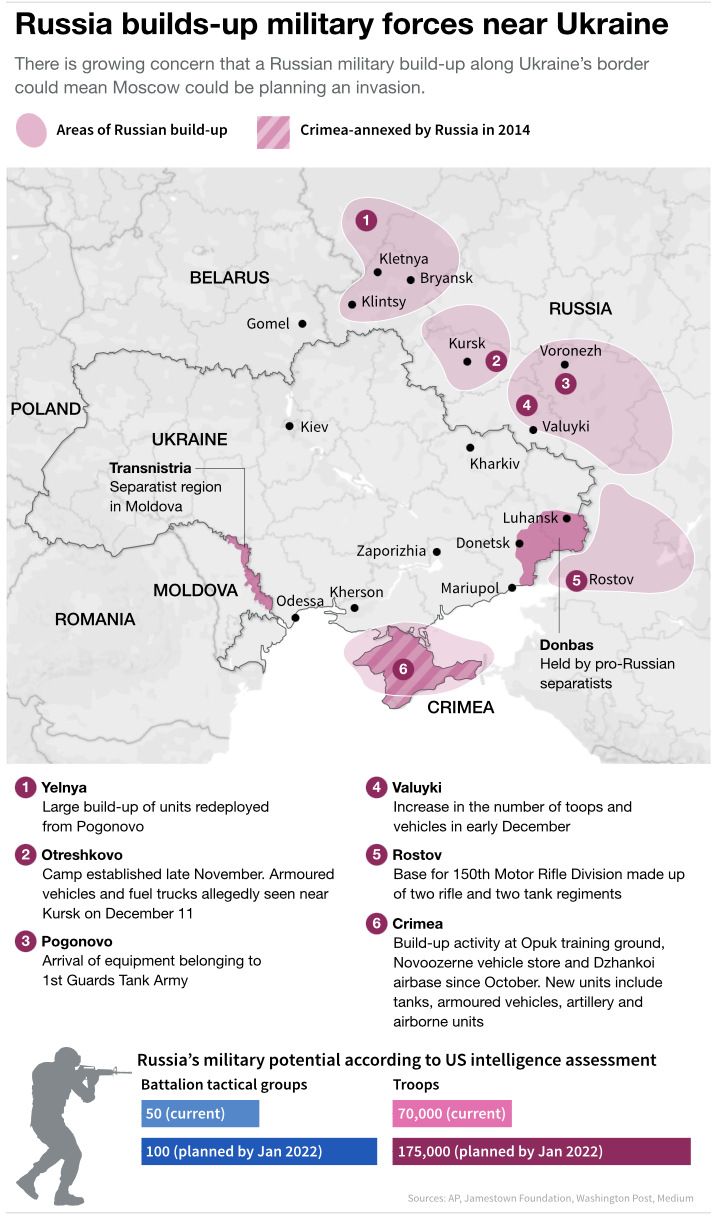 According to CNN, 120 out of Russia’s 160 Battalion Tactical Groups (BTGs) are now within 60km of Ukraine, a figure which represents 75 per cent of the country’s principal combat units.

The network also claims that there could be almost 200,000 Russian and separatist forces positioned in the area, with 35 of 50 known air defence battalions deployed against Ukraine.

There are also around 500 fighter and fighter-bomber aircraft and 50 medium to heavy bombers within range of Ukraine.

CBS also reports commanders have been ordered to proceed with an invasion, with specific plans being made as to how to manoeuvre troops on the battlefield.

Secretary of State Antony Blinken told CBS the US was convinced Russia was “moving forward” with invasion plans.

“Everything we’re seeing tells us that the decision we believe President Putin has made to invade is moving forward,” Mr Blinken said.

“We’ve seen that with provocations created by the Russians or separatist forces over the weekend, false flag operations, now the news just this morning that the ‘exercises’ Russia was engaged in in Belarus with 30,000 Russian forces that was supposed to end this weekend will now continue because of tensions in eastern Ukraine, tensions created by Russia and the separatist forces it backs there.”

The war-games were staged while Moscow continues to deny suggestions an invasion was imminent.

The tests included launches from ships, planes and submarines honing in on targets both on land and at sea.

French President Emmanuel Macron and Vladimir Putin have agreed on “working intensively to enable a meeting of the Trilateral Contact Group to be held in the next few hours,” the Élysée Palace has confirmed, with an objective to “obtain a commitment from all parties to a ceasefire on the line of contact.”

Foreign Minister Marise Payne has confirmed Australia will boost its cyber engagement with Ukriane in an effort to help protect the nation against cyber attacks from Russia.

“Australia will continue providing cyber security assistance to the Ukrainian government, including through a new bilateral Cyber Policy Dialogue and further cyber security training for Ukrainian officials,” Senator Payne said in a statement.

“Australia is committed to upholding the rules-based order online, just as we do offline, and supporting our partners in the face of cyber threats.”

According to The Australian, the training will be carried out online between Australian and Ukrainian cyber officials after Ukraine accused Russia of hacking into banks and government departments.

Australia will also offer asylum to Ukrainians on temporary visas.

It comes amid growing concern over a recurring symbol appearing on Russian tanks massing at the border with Ukraine.

Aric Toler, a reporter from Bellingcat, a Netherlands-based investigative journalism group, noted that some Russian vehicles but not others have been marked out with a white square and a ‘Z’ over the top.

Mr Toric said his news organisation had “been monitoring this stuff non-stop for 8 years and has no idea what they [the Zs] are, and hasn‘t seen it before.

“So, assume the worst, I guess/fear.”


Some have referred to it as the ‘Zorro squad’, while others have speculated that the ominous signs are a way to make sure Russians can tell their own vehicles apart from their enemies.

UK Prime Minister Boris Johnson has given a chilling insight into what an invasion might entail in an alarming interview with the BBC, suggesting Russia was planning “the biggest war in Europe since 1945”.

“I’m afraid to say, that the plan that we’re seeing, is for something that could be really the biggest war in Europe since 1945,” he said on Sunday.

He said “people need to understand that the sheer cost in human life that that could entail not just for Ukrainians, but also for, for Russians and for young Russians.”