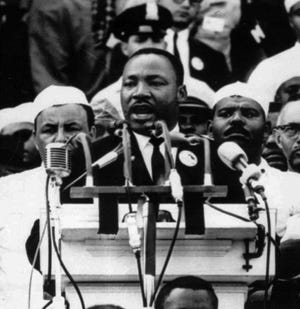 The Rev. Martin Luther King Jr. addresses marchers during his "I Have a Dream" speech at the Lincoln Memorial in Washington on Aug. 28, 1963. AP File Photo
There's a reason African Americans, historically, have been drawn to the Baptist sect.

Doesn't have quite the same ring, does it?

Great names go with great deeds. So maybe Michael King Sr. knew what he was doing when — in 1934 — he made a momentous change. Or rather two.

What? You didn't know that "Martin" was not MLK's given name?

That MLK was not born MLK might be news to some — as we prepare to celebrate the 36th federal Martin Luther King Day on Monday.

But the name change is worth thinking about. It says a lot about the man, the values of his family, and the larger meaning of what he did.

"Symbolically, it matters, and it adds a certain historical gravitas to his name," Parr said.

Democrats came up short on MLK day promise.What's next for the push for a voting rights bill?

Martin Luther — the original Martin Luther (1483-1546)  — was, of course, the founder of the Protestant Church. The Baptist sect, one of its branches, was the denomination of King Sr. and Jr. — one of whom succeeded the other as pastor of Atlanta's Ebenezer Baptist Church.

Luther was a rebel. "Here I stand, I can do no other," he famously said.

The very name — Protestant — has "protest" built into it. His church valued individual conscience, standing up to oppressive authority — which, in the 16th century, was the Catholic Church.

In MLK's day, the oppressive structure was racism. And he fought it with marches, speeches, sit-ins. He was arrested, his followers were beaten. But he refused to budge. "Here I stand."

It's likely that King Sr. — "Daddy King" — was made newly aware of the history of Martin Luther, and his resolute personality, during a 1934 pilgrimage to Germany, the land of Luther's birth. It was a momentous trip. A game changer.

That was the year he and his son were rechristened — unofficially, in the case of the boy — "Martin Luther."