The verdict followed a month-long trial in Chicago, Kelly’s hometown, where jurors were shown excerpts of the disturbing footage and heard testimony from the victim, now 37, who was identified only as “Jane”.

In Chicago, a conviction on just one such count carries a mandatory minimum sentence of five to 10 years.

It comes on top of a 30-year prison sentence handed to the I Believe I Can Fly singer in June after he was found guilty of sex trafficking and racketeering in a separate federal case in Brooklyn.

Jurors on Wednesday acquitted Kelly of the conspiracy charge alleging he rigged his earlier trial. The jury also found him not guilty of three counts of conspiring to receive child pornography as well as two further enticement charges.

Prosecutors during the trial said the Ignition singer was “a sexual predator” who had used his fame to prey on underage girls and record the abuse on video.

“He committed horrible crimes against children. … All these years later, the hidden side of Robert Kelly has come out.”

The evidence against Kelly included graphic videos of the Grammy winner abusing his teenage goddaughter — who gave damning testimony against him.

“That child, who had no prior sexual experiences in her life, was forced to lay on that floor while that man sitting right over there urinated on her,” Ms Pozolo said in her closing argument.

“That degrading act is forever captured on that video. That abuse is forever memorialised.”

Jane testified that Kelly had sex with her “innumerable times”, sometimes along with other teenage girls that he had asked her to recruit.

Defence lawyer Jennifer Bonjean specifically called out Kelly’s ex-girlfriend Lisa Van Allen, who testified that she stole a sex tape from the singer — as well as one of his former associates, Charles Freeman, who asked him for $1 million to return an incriminating sex tape. Both testified with immunity.

“They came in here to tell the government’s version of the truth,” Ms Bonjean said during her closing argument on Tuesday. 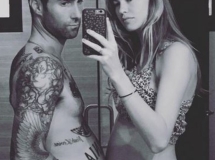 Months after multiple women accused Adam Levine of sliding into their DMs, the Maroon 5 star and his...