×
Thursday - 15/09/2022 10:10 Author: Editors Desk Source: CNN Business
The retooled show has been a top priority of CNN’s chairman and CEO Chris Licht, who started in May.

The announcement was made by CNN chief executive Chris Licht, who has started to put his stamp on the network's television programming after taking the helm in May.

"There is no stronger combination of talent than Don, Poppy and Kaitlan to deliver on our promise of a game-changing morning news program," Licht said in a press release. "They are each uniquely intelligent, reliable and compelling; together they have a rare and palpable chemistry," Licht added. "Combined with CNN's resources and global newsgathering capabilities, we will offer a smart, bold and refreshing way to start the day." CNN said that John Berman and Brianna Keilar, who anchor the network's current morning show, "New Day," will remain at the network in different roles when the new show launches. Berman and Keilar will continue anchoring "New Day" until the new program premieres. This is a breaking news story. Please check back for updates.
Tweet 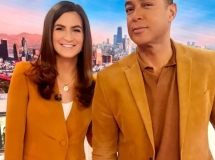