As Biden won the presidency, Republicans cemented their grip on power for the next decade

While the world focused on the election between Donald Trump and Joe Biden in November, some of the most consequential contests were in state legislative races between candidates many have never heard of.

State lawmakers have the authority to redraw electoral districts in most US states every 10 years. In 2010, Republicans undertook an unprecedented effort – called Project Redmap – to win control of state legislatures across the country and drew congressional and state legislative districts that gave them a significant advantage for the next decade. In 2020, Democrats sought to avoid a repeat of 2010 and poured millions of dollars and other resources into winning key races.

Democrats failed to flip any of the legislative chambers they targeted and Republicans came out of election night in nearly the best possible position for drawing districts, according to an analysis by FiveThirtyEight, and will have the opportunity to draw 188 congressional seats, 43% of the House of Representatives. Democrats will have a chance to draw at most just 73 seats. Republicans will probably also be able to draw districts that will make it more difficult for Democrats to hold their majority in the US House in 2022.

“It was really bad. It was devastating to the project of building long-term power,” said Amanda Litman, the co-founder and executive director of Run for Something, a group focused on local races.

Who controls redistricting after the 2020 election? 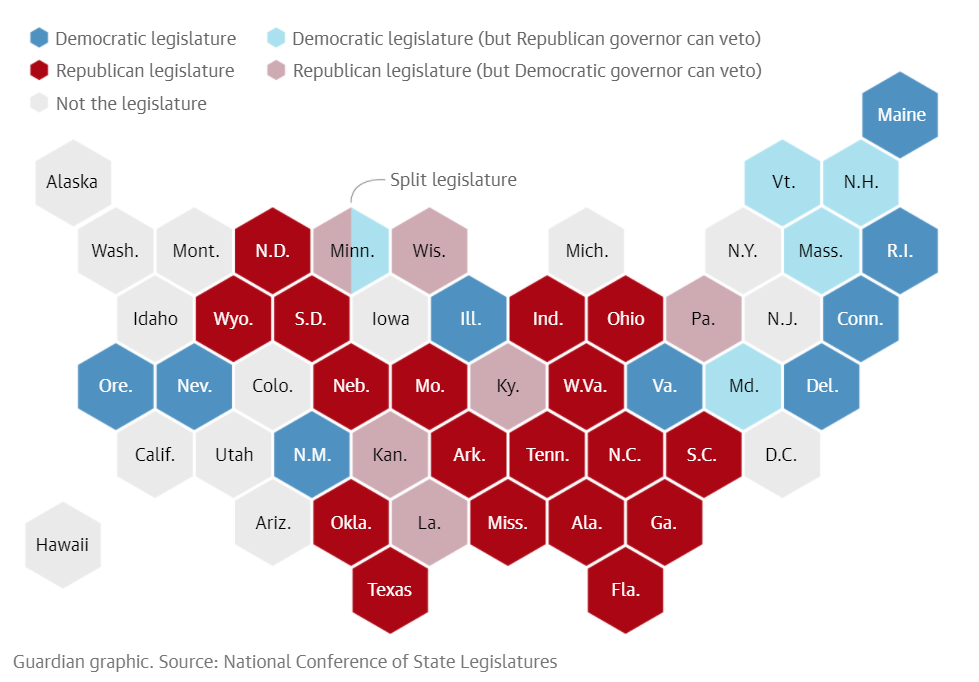 There isn’t a single explanation for why Democrats performed so poorly in down-ballot races. The decision not to canvass in person may have had a more severe impact on local races. Democratic candidates were also trying to win in districts that Republicans had already gerrymandered to their own advantage. “The loss in down-ballot races was a loss by a thousand paper cuts,” Litman said.

Democrats are quick to point out that their position isn’t as bad as it was after 2010. There are Democrats in the governor’s mansion in Wisconsin and Pennsylvania who can veto excessively gerrymandered maps. An independent commission will draw districts in Michigan for the first time, thanks to a 2018 referendum grassroots by activists. Voters in Colorado, Utah, and Virginia have also all passed recent measures to limit partisan influence.

But Republicans have two additional advantages this year. In 2019, the US supreme court said that federal courts could not strike down districts on the grounds that they were too partisan, giving lawmakers a green light to virtually guarantee their own re-election. 2021 will also be the first time that places with a history of voting discrimination will also be able to draw districts without first submitting them to the justice department for approval because of a 2013 supreme court decision, Shelby County v Holder, that struck down a pre-clearance provision at the heart of the 1965 Voting Rights Act.

Here’s a look at who will draw the districts in several key states:

Texas offered Democrats one of their best chances to prevent Republican gerrymandering. Going into the November elections, Republicans controlled both chambers of the state legislature and the governor’s mansion, the bodies involved in redistricting. Democrats, however, believed they could flip control of the state House of Representatives, giving them a seat at the table. Democrats needed to flip nine seats in the state legislature to take control of the House, a move that seemed well within grasp after the party flipped 12 seats just two years ago.

But Democrats fell far short, flipping just one seat and losing another.

Republicans will once again have total control to draw all of Texas’ 40 congressional districts – the state is projected to gain two to three seats in Congress because of population growth – as well as nearly 200 districts that make up the state legislature. Those districts will probably cement Republican control in a state where Democrats have made political gains in recent years.

Democrat Akilah Bacy, a lawyer and community activist, was running to flip a House district in the north-west Houston area. She lost her race by just under 2,100 votes. Bacy said she thought a last-minute decision by the governor, Greg Abbott, to only allow a single ballot drop-off location for the 2.4m voters in her county affected the race. But, she added that Democrats needed to more carefully calibrate their messaging.

“I knew we were fighting an uphill battle,” Bacy said in an interview with the Guardian. “There is definitely some introspective work we need to do in the Democratic party and make sure that we are speaking to everyone in our base. Not only that, but making sure that our messages are local to the communities and making sure that they’re messages that matter to the community.”

Ten years ago, Republicans gerrymandered their way to clear majorities.

After the 2010 census, Texas had gained about 4 million residents – mostly Black and Hispanic people – which gave them four more congressional seats.

The Republican-controlled legislature drew new maps so that three of the four new districts would skew Republican. A federal court blocked the state from using those maps in 2012 because they discriminated against people of color, and the court drew new interim maps to be used that year. These maps, though, were still based on the partisan maps and had a lot of the same problems.

Areas where one party wins by a huge margin but loses in several surrounding districts by smaller margins are a sign of gerrymandering. You can toggle to see how 'compact' each district is. We use the Polsby-Popper method, which is basically a measure of how similar each district is to a circle. Gray areas are districts that didn't have a Republican and a Democratic candidate.
Election results

After that election, the Republicans permanently adopted these maps with only minor changes and argued they should be allowed because the courts themselves had drawn them. Critics filed a lawsuit saying the maps still discriminated against people of color. In 2018, the US supreme court’s conservative majority ruled that the new districts were not racially discriminatory, except for one state house district in Fort Worth. The decisionallowed Texas to get away with serious discrimination without real consequences.

One shape that was allowed to stay was the 35th congressional district, which encompasses parts of San Antonio in the south and Austin in the north – a district that packs various clusters of Hispanic voters into the same district.