×
Saturday - 10/12/2022 14:35 Author: Editors Desk Source: News Corp Australia Network:
There are concerns the people surrounding Celine Dion amid her health crisis might not have “her best interests at heart”.
Along the Las Vegas strip, rumours have been rife about Celine Dion’s health.

It’s a small town, and, for 15 years the Canadian songbird was its sequined queen as she warbled to millions of fans.

After all, as Vegas journalist Scott Roeben said of her legendary residency at Caesars Palace: “This is the house that Celine built.”

“People had been telling me for some time that Celine would not be returning to live to perform — maybe ever at all,” Roeben told Page Six.

Dion, who owes much of her estimated $470 million fortune to Vegas shows, put an end to the gossip this week with an emotional video posted to social media. The singer announced that she has been diagnosed with a neurological disorder known as stiff person syndrome and will be postponing or cancelling her shows.

“I’ve been dealing with problems with my health for a long time, and it’s been really difficult for me to face these challenges and to talk about everything that I’ve been going through,” she said.

“Recently I have been diagnosed with a very rare neurological syndrome, which affects something like one in a million people,” she continued, explaining that the side effects have been brutal.

Dion, now 54, first announced in October 2021 that she had to postpone her new Las Vegas residency at Resorts World because of “severe” muscle spasms — just a month before she was due to take to the stage. Months later, she cancelled her North American tour and postponed her European tour.

Stiff person syndrome causes rigidity and spasms in the trunk and limbs, according to the Cleveland Clinic. Over time, leg muscles become stiff followed by muscles in the arms and face.

The Power of Love singer said the condition has made it difficult to walk and has prevented her from singing the way she’s “used to”.

“When it’s Celine, it’s not what you do, it’s who you are,” Roeben said of her love of performing. “To have it taken away, it’s even more tragic.

“My sources believe she may not be able to return to the stage. After that initial talk of struggling with muscle spasms, we started hearing about how serious things were, but Celine is the type of person who doesn’t want people to be unnecessarily concerned: Her fans are obsessed with every breath she takes. They hang on every word.”

Dion has made it no secret that she has struggled since the loss of her husband and manager René Angélil, who died following a lengthy battle with throat cancer in January 2016. As Dion has said, he was the only man she ever kissed, and it was Angélil who helped her negotiate her first residency with Caesars in 2003. Since then her residencies have grossed $681.3 million, according to AEG.

One insider who knew the couple told Page Six: “Since René died, it’s been very difficult. He hasn’t been there to protect Celine. He was her touchstone, he looked after everything for her. Celine relied on him for everything — her management, her finances, her music production — and things have gone downhill since his passing.

“I’m not sure exactly who she has in her corner looking after her anymore, or if they have her best interests at heart,” the insider said, adding: “It’s true — she may not ever be able to perform live again.”

As Page Six revealed in 2019, there were fears that a new crowd of friends, including “best friend” and former backup dancer Pepe Muñoz, had too much control over Dion.

“Pepe is like her boy toy who is really trying to take over. He’s isolating her and people are feeling it. She’s in love with this guy and listens to everything he’s saying. People go to him when they have questions. He’s fully taken over. The only people around her now [are] Pepe, the hairdresser, and the stylist,” said a source at the time.

Dion met Angélil in 1980 in their native Quebec, Canada. The music manager, who was 38 and married with three children, gave up all his other acts and remortgaged his house to turn Dion, then 12 years old, into a star.

The couple started secretly dating when Dion was 19 and Angélil was 45. After years of keeping their love under wraps, Dion revealed the romance in the liner notes of her 1993 album, “The Colour of My Love,” writing: “René, for so many years I’ve kept our special dream locked away inside my heart. But now it’s too powerful to keep inside’.”

The couple wed in December 1994 with a lavish ceremony at the Notre Dame Basilica of Montreal that was broadcast live on Canadian TV.

It was the first marriage for Dion and the third for Angélil, who was previously wed twice. Their son René-Charles was born in January 2001 after fertility treatments. Following six rounds of IVF, Dion gave birth to twin sons Nelson and Eddy in October 2010.

Angélil was first diagnosed with throat cancer in 1999 and Dion took a two-year hiatus from performing to care for her husband.

After having a tumour removed from his throat in December 2013, Angélil was diagnosed with cancer once again in 2014. Once again, Dion also stepped back from her career in order to focus on caring for him.

The singer has said her greatest pride remains her children but admitted she had struggled with René-Charles, now a rapper and DJ who goes by the stage name Big Tip.

“If you say no to so many things they will turn around and they will still do them away from you, which is even scarier,” she told The Sun. “The girls are coming now — something to be stressed about. I am giving him more space. He does stuff sometimes, I have to say I don’t necessarily agree with what he chooses to try. But as long as he’s using his intelligence and his brain, I trust him.”

She added, however, “I know he’s well taken care of above — his dad is sending him good energy.”

Since her husband’s death, it’s been unclear to whom Dion could turn. Muñoz, 38, was pictured by her side as she embraced a new high-fashion image, turning to designers including Valentino. “Yeah, there’s another man in my life but not THE man in my life”, she told The Sun in 2019.

Dion was also aware of concern for her health among devoted fans due to her significant weight loss. She put it down to ballet lessons four times a week and training with Muñoz, telling ABC News in 2019: “It’s true that I’m a little thinner. Everything’s fine, nothing’s wrong.”

Sources said, however, that the singer continues to struggle without her husband.

She is rarely seen out and about in Vegas, where she lives after selling a $45 million mansion in Florida as well as her Montreal residence.

Roeben said that, a few years ago, people in Vegas would “spot Celine out and about with her entourage. But, for this very long stretch of time, nobody has shared even a paparazzi photo or a fan photo. She just kind of disappeared.”

The Grammy-award-winning star’s spring 2023 shows have now been pushed to 2024, and she cancelled eight planned summer 2023 shows.

Meanwhile, “It’s All Coming Back to Me,” a romantic drama in which Dion is set to make her acting debut, has been postponed from February to May 2023, a source who knows Dion told Page Six.

The film stars Priyanka Chopra Jonas as a woman struggling to move on from the death of her fiance, played by Sam Heughan. Dion plays herself in the movie, which also features her music.

“Celine said she will be unveiling new songs for the movie,” said the source of Dion. “But whether she does press or not for it [remains to be seen].” 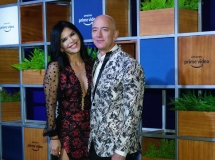