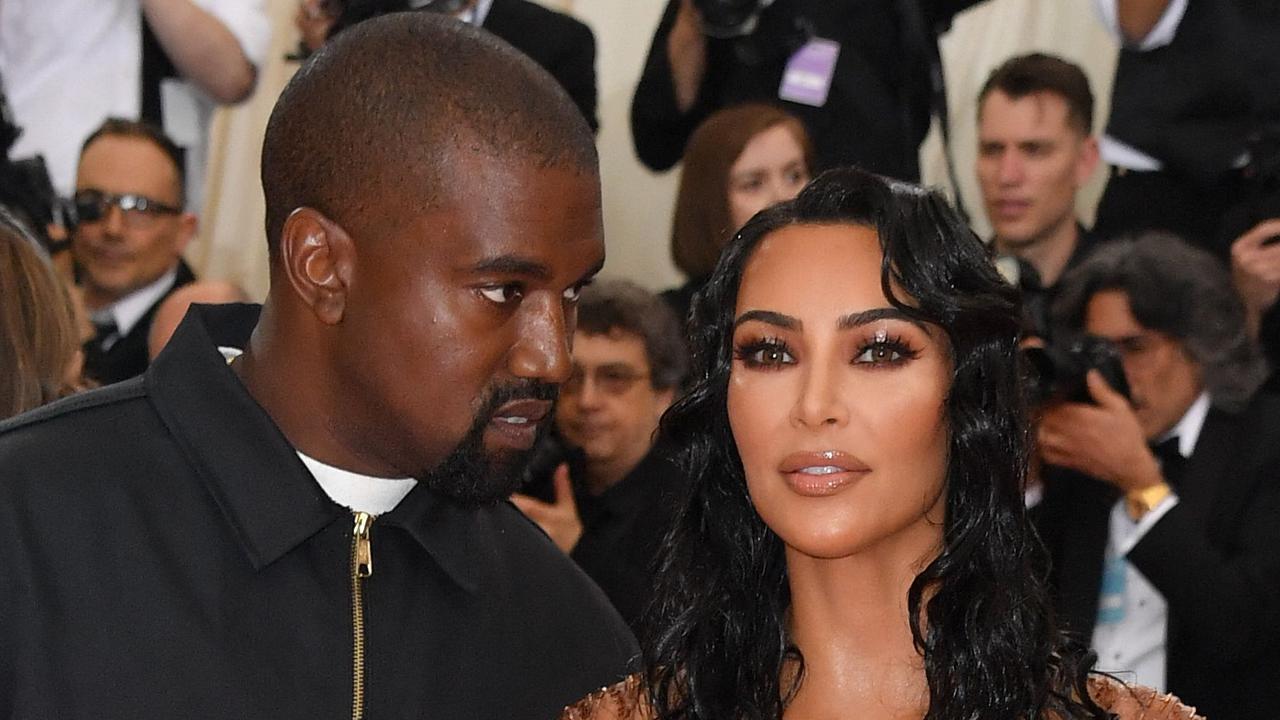 Kim has acknowledged he “came off as harrassing” Kim with his recent actions. Picture: AFP
A day after publishing his estranged wife’s desperate texts to the world, Kanye West claims he’s “working on his communication.”

Kanye West has returned to social media after wiping all evidence of the Instagram posting spree in which he he shared several private text messages from estranged wife Kim Kardashian.

The troubled rapper had posted a private plea from Kardashian begging him to stop publicly slamming her new boyfriend Pete Davidson before somebody gets hurt.

In a new post to social media, West acknowledged that he “came off as harassing” his estranged wife by posting her private texts online - all of which he has since deleted.

“I’ve learned that using all caps makes people feel like I’m screaming at them,” he wrote.

“I’m working on my communication. I can benefit from a team of creative professionals, organizers, mobilizers and community leaders. Thank everybody for supporting me. I know sharing screen shots was jarring and came off as harassing Kim. I take accountability. I’m still learning in real time. I don’t have all the answers. To be good leader is to be a good listener.”

West, who has in recent weeks complained that he no longer had Kim’s phone number, posted a text message from a number saved as “Kim other phone” which read: “U are creating a dangerous and scary environment and someone will hurt Pete and this will all be your fault.”

He followed on with what appeared to be a conversation with his former wife, before deleting the array of screenshots from his Instagram.

The drama even caused Piers Morgan to call the rapper “a d-khead”.

Overnight there were no mentions of the Kardashian clan, but a nod to American football and former Dolphins head coach Brian Flores and a reference to “Black Future Month”.

In a high-profile case in the US, Flores is suing the National Football League and three of its teams on allegations of racist hiring practices and wrongful termination. Those teams are the New York Giants, Denver Broncos and Dolphins. The allegations have been denied.


Despite leading Miami to back-to-back wins, Flores was dumped following the 2021 season. He alleges the league refuses to address “racism, particularly when it comes to the hiring and retention of Black head coaches, co-ordinators and general managers.”

Overnight Kanye returned to social media to post a Google search image of Flores, claiming “me and my dad are on the phone and he brought you up to me”.

“Sending you love and public support.” he wrote.

Meanwhile, the rapper has been teasing the Black Future Movement on social media for the last week, supported by outcast footballer Antonio Brown and Pusha T have also shared on their socials media accounts.

In a new post, he shared a screenshot of a fan’s account which reads: “Black Future Month! Bring him into Donda Sports.”

He was dumped by the Tampa Bay Buccaneers following a public meltdown where he removed his uniform and gloves during a game and subsequently stormed out.

In yesterday’s posting spree, Kanye posted what appear to be further snippets of his text conversation with Kim. “There are dangerous people out there and this is scary and it doesn’t have to be,” Kim told him, before he assures her he’ll make sure nothing happens to “Skete” and “will always do everything to protect you and our family forever.”

In another apparent snippet of the conversation posted by Kanye, Kim appears to ask Kanye why he “can’t keep any of our conversations private???”

Only hours earlier, Kanye made a big public play to win back Kim, sending a truck full of roses to the gates of her secure California compound and posting pictures of the stunt online.