More than eight years after Malaysian Airlines flight MH370 disappeared, an expert has proposed a new theory to explain the 2014 mystery.

A former French air force air traffic controller says he has evidence to prove the plane was intentionally brought down in the South Indian Ocean in a location that has never been searched.

Speaking exclusively to The Sun Online, Gilles Diharce said he is convinced the disappearance of the plane on March 8, 2014, was no accident.

There have been many conflicting theories as to what happened when the plane took off from Kuala Lumpur – but never arrived at its intended destination of Beijing.

The flight, with pilot Zaharie Ahmad Shah at the helm, vanished from flight radar around 40 minutes after taking off, sparking the world’s biggest aviation mystery.

The official theory for the Boeing-777’s disappearance suggests the plane executed a dramatic U-turn shortly after its final communication with air traffic control, flying for hours before plummeting into the Indian Ocean.

Some believe the plane was hijacked while others have claimed the aircraft was brought down by the US air force or that the plane was in “cruising mode” when it crashed.

Many of the theories place the blame for the disappearance on the pilot, Captain Shah, something Mr Diharce also believes.

But his explanation differs from others, suggesting instead of the plane crashing in a high-speed “death spiral” crash into a spot known as the Seventh Arc, the pilot attempted a “soft ditching” – a controlled emergency landing – during its final descent into the ocean.

Mr Diharce’ theory claims that in his final moments, the pilot could have turned on the plane’s backup power system to regain control of the aircraft when both engines failed due to fuel exhaustion.

It would explain why the plane’s communication system suddenly turned on and tried to connect to the satellite system, Inmarsat.

He believes the pilot then landed the plane in a controlled glide.

But that did not go as planned and the choppy waters caused the aircraft to split into two or three parts.

Mr Diharce believes the glide was a deliberate attempt to sink the wreckage with as little debris as possible.

“Why would a person want to fly the aircraft into the middle of the Indian Ocean?” he said.

“It’s possible the person who controlled the aircraft didn’t want anyone to find the plane in the future. To disappear without a trace.”

If his theory is correct, it also means that the plane could have crashed into an unsearched part of the South Indian Ocean.

Some seven hours after MH370 went missing – and close to fuel exhaustion – the pilot carried out the deliberate act of downing the plane and its passengers, Mr Diharce claims.

During its sudden dive, the plane’s SATCOM communications system is restarted and requests to join the Inmarsat network – suggesting someone was still in control during the jet’s final moments.

“It sent a message to the satellite to reconnect to the network so the power is interrupted in these eight minutes,” Mr Diharce said.

He believes the pilot could have switched the plane on to a backup system called the APU to be able to land it in gliding mode.

“In order to ditch the plane, you have to have better control of the aircraft. If you don’t have an engine, it’s very difficult to fly the aircraft and it is very heavy to fly,” he said.

“If you had the APU on, you regain normal electrical power of all the flight controls and you regain full control with the fly-by-wire controls.

“It would explain the power interruptions of the SATCOM system and why it tried to reconnect.”

He believes the plane glided into the ocean instead of the “death spiral” suggested in official reports after the right engine “flamed out” due to lack of fuel.

With only the left engine still functioning the pilot would have had to use the plane’s rudder to keep it straight to stop it from spinning in a high-speed crash.

Gilles believes that the lack of debris from the crash also points to a ditching attempt and that MH370 could have broken into two or three parts. 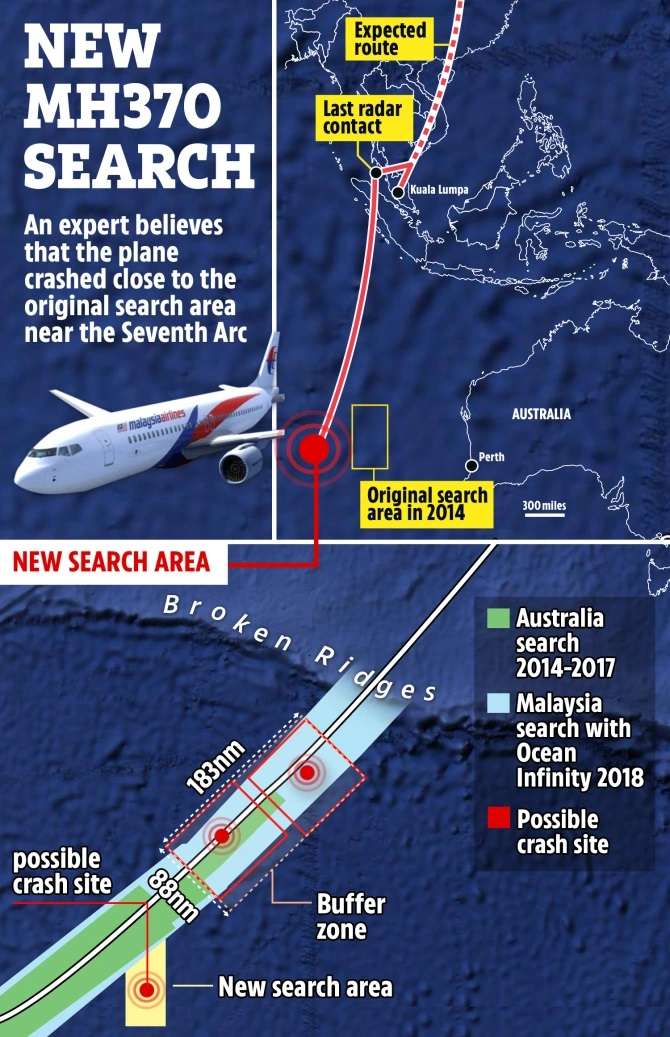 Talking about the plane’s final descent, Mr Diharce said: “It’s not easy to understand how the plane was flown at this point; it’s a hypothesis. What we can consider is that the search was unsuccessful.

“The officials made some assumptions in order to define the search area. On the Seventh Arc, we know the aircraft sent messages to the satellite to regain contact.

“They considered that it was a high-speed crash at the end. I’m not totally sure of that.”

He said the first debris found gave a clue to how the plane came down.

“It could suggest the flaperon was still moving upward when it hit the water.

“We don’t have this debris if you have a high-speed crash.”

The flaperon helps to control the plane’s speed and position and is used during landings.

Mr Diharce believes that the damage to the flaperon, found on Reunion Island in 2015, suggests the plane glided rather than spiralling out of the sky.

But he has never been able to analyse the debris up close – he has only seen images shared with the public. 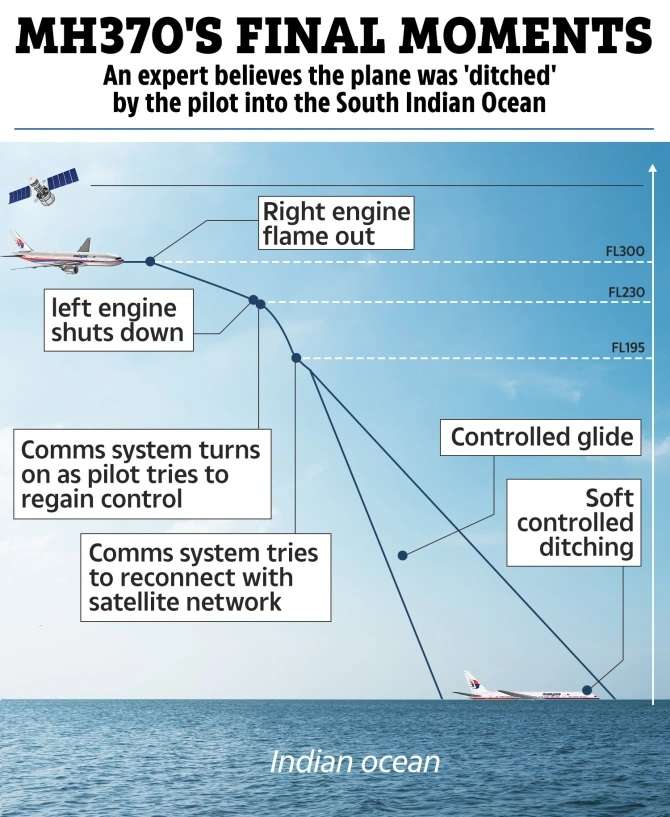 When asked about a possible motive, Mr Diharce said that was unclear, but pointed to the fact the pilot did not have a medical check for four years before the disappearance – something pilots are required to do annually.

Captain Shah’s daughter also suggested her father was in emotional turmoil over the impending break-up of his marriage and was distracted and withdrawn in the months leading up to the crash.

Mystery as communication system powered up

Mr Diharce went on to explain that passenger planes are equipped with several backup systems should anything on-board fail – meaning it would be impossible not to make contact if there had been a technical fault with the plane.

A serving member of the French air force for 17 years, he said: “It’s impossible to consider that this plane had a technical failure.

“When you study the first part of the disappearance, it’s very difficult to explain that it was a technical fault with the aircraft, but someone on the plane who didn’t want to call on the radio.”

MH370’s SATCOM communication system was turned off until it made its final descent.

Mr Diharce said: “It’s certainly surprising. At this time the SATCOM was powered up again, so the question is why was the SATCOM not powered before?

“Is there someone in the cockpit who disconnected this electric power input?” he said.

“When the SATCOM has a new connection, the plane should be able to send messages again that show the position of the plane every 30 minutes. That was not the case.”

Mr Diharce has mapped out various locations where he believes the plane might have eventually crashed.

The main current theory is that the wreck could be on the seabed in an area known as the Seventh Arc – which has previously been searched twice.


However, Mr Diharce has identified an area just next to the original search zone covered by Ocean Infinity and the Australian Government between 2014 and 2018.

He submitted his findings to the French Bureau of Enquiry and Analysis for Civil Aviation Safety, and to Australian and Malaysian authorities.

Ocean Infinity has proposed a final search in 2023 and Mr Diharce hopes his new search area will be considered.