×
Tuesday - 05/07/2022 20:03
The man suspected of murdering seven people at a Chicago parade allegedly disguised himself as a woman to evade capture.

A July 4 parade shooting suspect appeared to disguise himself as a woman in a bid to evade arrest, according to investigators.

Robert Crimo III, 21, was arrested and taken into custody on Monday evening – hours after allegedly opening fire in Highland Park, a town north of Chicago in the US state of Illinois.

Gunshots were first reported just after 10am local time, according to police.

Crimo is accused of opening fire at the parade which left seven dead and dozens injured, The Sun reported.

Cops said Crimo, who was considered armed and dangerous, was arrested just after 6:40pm – more than eight hours after the first shots were heard.

Police believe that he was disguised as a woman at some point in a bid to evade arrest, TV station NBC Chicago reported.

It’s not known if he was wearing the disguise at the moment he was arrested.


She said that charges are expected to be filed against Crimo on Tuesday.

Horrific details have emerged about the mass shooting, with at least 70 rounds fired at the crowd of people.

Dr. David Baum, who treated the victims, told CNN some of the dead were “blown up”.

“The horrific scene of some of the bodies is unspeakable for the average person.

“Having been a physician, I’ve seen things in ERs, you know, you do see lots of blood. But the bodies were literally — some of the bodies — it was an evisceration injury from the power of this gun and the bullets.

“There was another person who had an unspeakable head injury. Unspeakable,” he said.

The names of six people who died on Monday, in the immediate aftermath of the shooting have now been announced. On Tuesday afternoon, it was revealed the attack had claimed a seventh victim, however no further details have been released.

The names were announced by Lake Country Coroner Jennifer Banek, who shared the details during a press conference.

The victims were identified as:

All but one of the victims were locals of the Highland Park area. The granddaughter of Mr Toledo-Zaragoza, Xochil Toledo, said the retiree was originally going to skip the parade due to mobility issues with his walker, however his family insisted he not miss out on the celebrations.

Speaking to the New York Post, Ms Toledo described the horrific moment her family realised Mr Toledo-Zaragoza had been killed.

“When the parade started, I turned around to see [Grandpa’s] reaction, and he was so happy to be there, and then all of a sudden, we heard gunshots. We thought it was part of the parade. We didn’t know what was going [on] until we could feel blood on us from our grandpa,” Xochil recalled.

“That’s when we all started panicking and going to the floor. We all went our separate ways. We all didn’t know what to do, how to react, we were in shock, my grandpa’s dead body was right behind us,” she continued.

“Our instinct was to run away from the scene. My dad and one of my cousins stayed back, hugging his body.”

It has since emerged that Crimo posted chilling videos on a YouTube channel that has since been removed.

Crimo reportedly had a verified profile on Spotify and was known as Awake the Rapper. It appears that his account has since been removed.

He released an EP earlier this year named Brainwashed and some of the songs were titled Dead Again and I am the Storm.

He released three albums including Messages in 2017, Observer in 2018, and the self-titled Awake the Rapper in 2021.

Crimo’s IMDB page reveals that he started uploading music to the internet when he was 11.

Witnesses told the Chicago Sun-Times that they heard dozens of shots.

Miles Zaremski told the outlet: “I heard 20 to 25 shots, which were in rapid succession. So it couldn’t have been just a handgun or a shotgun.”

Larry Bloom told NBC Chicago that he heard “popping noises” and thought the sound was coming from one of the parade floats. 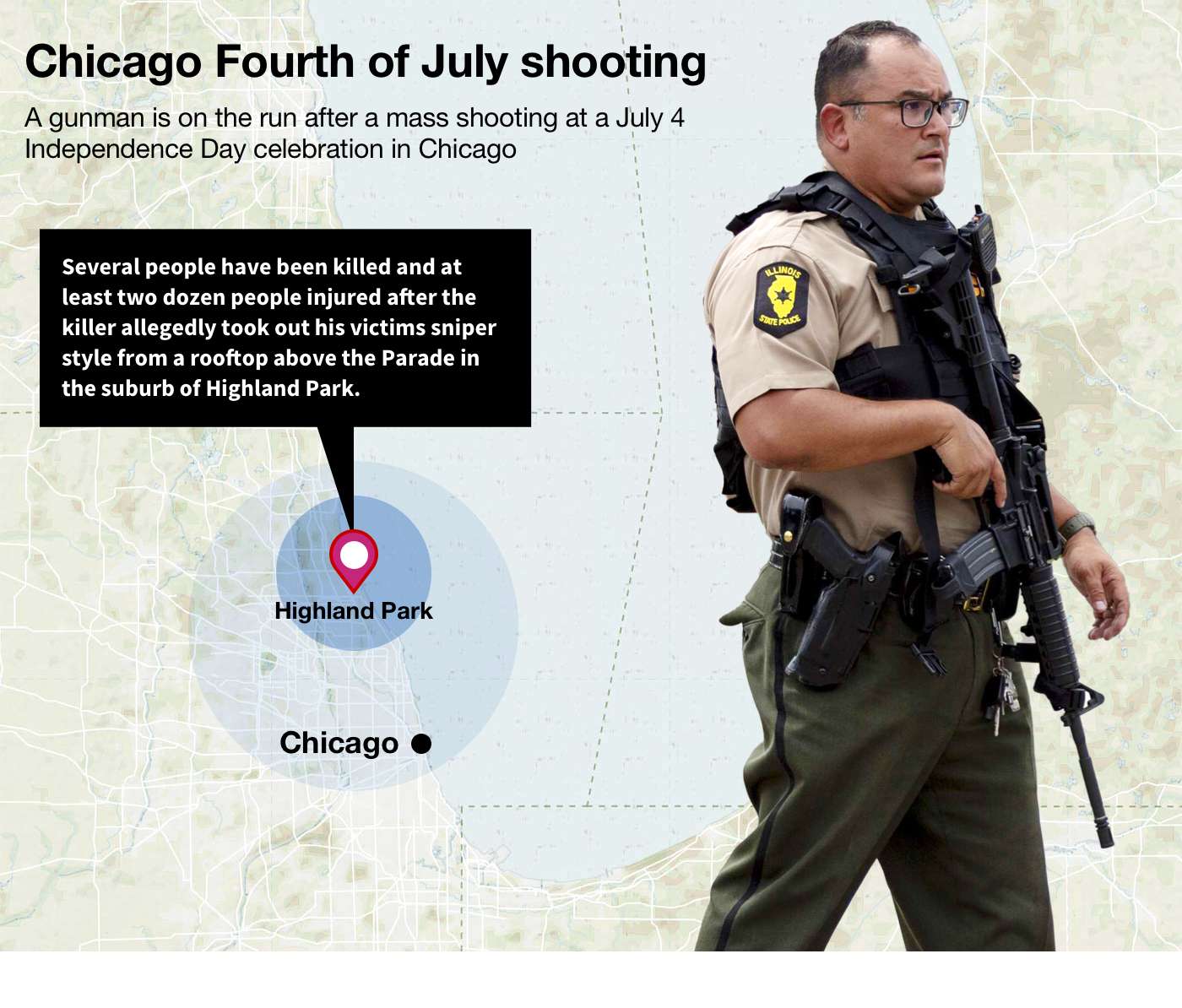 Construction worker Alexander Sandoval, 39, said he put his son and his little brother in a dumpster to escape the chaos.

He told the New York Times that he was enjoying the parade when gunfire erupted.

He said: “When it started happening, I thought it was the Navy saluting the flag. Then I grabbed my kid and we ran and tried to break a store window to get away from it.”

He tried to punch down the door of a closed business as he tried to escape before putting two kids in a dumpster.

Zoe Pawelczek told CNN that she heard an “array of pops” that she thought were fireworks.

She said that she saw a girl shot and killed.

She recalled: “I saw her die. I’ve never seen anything like this.”

Aleks Macys, 53, revealed she drove a woman who had been shot in the head to the hospital.

She said the woman’s daughter, who hasn’t been named, was crying: “Mommy has been shot.”

Michelle Bernstein told the New York Times that her daughters were at friends’ homes and she ordered them to remain indoors until the shooter had been caught.

Two of the seven people killed in the massacre have been named.

Nicolas Toledo, a grandfather, was killed.

His grandson David told ABC News: “My grandpa was a funny man. He’d always joke around and be playful with his grandkids. He arrived [in] the US in the ‘80s and worked around the Highland Park area for many years.

His granddaughter Xochil Toledo said that he was sitting in his wheelchair when bullets started flying.

She told WBEZ that her dad tried to “shield” her granddad.

The massacre in Illinois was the 309th mass shooting America has seen this year, shocking data compiled by the Gun Violence Archive reveals.

The bloodbath came just weeks after 21 people, including 19 kids, were slaughtered at an elementary school in Uvalde, Texas.

– With The US Sun