×
Thursday - 29/12/2022 14:59 Author: Editors Desk Source: France 24
More than six decades after he first wowed the world on the football pitch, Pelé is no more. The superstar Brazil nicknamed "O Rei" – the King – and winner of three World Cups died on Thursday at the age of 82 after a battle with colon cancer. His death caps a storied life as one of the greatest footballers the game has ever known.

Pelé’s daughter Kely Nascimento announced his death on Instagram. “We love you infinitely, rest in peace,” she wrote. His agent, Joe Fraga, confirmed his death.

The standard-bearer of “the beautiful game” had undergone treatment for colon cancer since 2021. He had been hospitalised for the last month with multiple ailments and died of organ failure.

“Inspiration and love marked the journey of King Pelé, who peacefully passed away today,” read his official Instagram account.

Pelé's daughter on Instagram: "Everything we are is thanks to you. We love you infinitely. Rest in peace. 💔" pic.twitter.com/uevgedQunn

Edson Arantes do Nascimento was born to a poor family in Três Corações in southeastern Brazil on October 23, 1940. Nicknamed Pelé as a schoolboy, his first football was reportedly a sock stuffed with rags. The first man to have ever scored 1,000 career goals, Pelé's dizzying exploits on the pitch brought him to 1,281 goals in 1,362 matches between 1956 and 1977 – including more than 1,000 for fabled Santos FC.

It was wearing that club's famous white shirt that Pelé achieved some of his most glittering successes, not least winning two Copa Libertadores (1961, 1962) and a Recopa Sudamericana (1968).

But Pelé, who also won 11 regional championships, was far more than just a club player. Selected 92 times by his country, Pelé's international play was, too, the stuff of legend. He won three World Cups with Brazil (1958, 1962 and 1970) – a feat that remains his alone.

Pelé was blessed “with speed, balance, control, power, and an uncanny ability to anticipate the movements of his opponents and teammates”, according to the Bleacher Report sport news site. While leading his clubs to new heights, he also made an impression with his “gentleman-like behavior both on and off the pitch”.

Pelé's legend was forged starting with his earliest appearances, a precocious talent deploying his remarkable skills for all to see. He was just 15 in September 1956 when he first took the field for Santos, a baptism of fire against FC Corinthians that would see the young hopeful notch his first goal.

Pelé would step up to football's biggest stage two years later and shine for all the world to see. In 1958, the 17-year-old already had 100 goals under his belt in Brazil, winning him a place on the national squad for the World Cup in Sweden. The teenager was left on the bench for the Seleção's three group matches to begin the tournament. But with the support of his teammates, Pelé was drafted into the starting 11 for the knock-out stages.

Given a shot, the teen phenom was nothing short of a revelation. In the quarter-finals Pelé scored his first goal, giving Brazil a 1-0 win over Wales. In the semi-finals, he scored three consecutive goals to dispatch France. And in the final against the tournament hosts, Pelé netted another two goals as the Seleção beat Sweden 5-2 to win the World Cup.

The Brazilian prodigy's effort and talent would lay the groundwork for an extraordinary career punctuated by sky-high numbers. On six occasions, Pelé managed to score five goals in the same game, but he also notched 30 quadruples and 92 triples over two illustrious decades. In 1964, he destroyed the Botafogo defence with eight goals in a single match.

After a successful turn with the New York Cosmos of the North American Soccer League, "O Rei" retired in 1977, having collected 27 team trophies alongside myriad individual honours and memories galore. Of the latter, perhaps none were to rival the feverish atmosphere at the Maracanã in Rio de Janeiro during the 1969 match that saw Pelé score his 1,000th career goal.

Even after hanging up his cleats, Pelé continued to shine. After retirement he dedicated much of his time to causes close to his heart, and his humanitarian work with UNICEF earned him the 1978 International Peace Award. He made occasional appearances on the silver screen – he starred alongside Sylvester Stallone and Michael Caine in 1981's Victory – but also briefly entered politics, serving as Brazil's minister of sport from 1995 to 1998. He also served as a United Nations ambassador for ecology and the environment as well as a Goodwill Ambassador for UNESCO.

The sporting honours also continued to roll in. Péle was inducted into the US National Soccer Hall of Fame in 1993 and named Athlete of the Century by the International Olympic Committee in 1999. FIFA gave him an honorary Ballon d'Or in 2014. Football's highest authority also designated Pelé as FIFA Player of the Century, an honour he shared with Argentina's Diego Maradona (a joint prize that always rankled the diminutive Argentine, who felt he alone deserved the title).

Some 45 years after Pelé stepped off the professional pitch, such accolades helped establish his status as a legend with new generations.

Now, after a long reign crowned with successes, Pelé has taken his leave. O Rei is dead ... Long live the King! 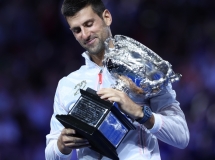