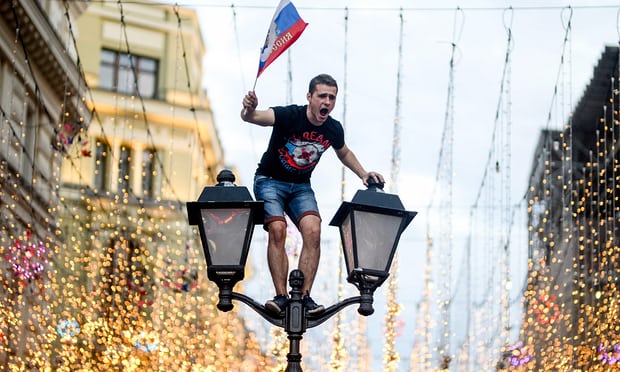 A wild night: Russia win and Moscow parties as never before

Judging by the way Moscow celebrated, Russia have won the World Cup.

Were you there? Did you see the men hanging off the scaffolding, swinging around the supporting poles 20 metres up? That Mercedes sedan that opened its trunk to reveal subwoofers blaring Russian club hip-hop? The two girls surfing on top of a black Geländewagen down Tverskaya street?

Russia only made it through to the quarter-finals on Sunday night with their unlikely victory on penalties over Spain, but it unleashed a block party the likes of which Moscow has never seen, and likely will never see again.

The squares around the Bolshoi theatre, the Kremlin, the pedestrian streets that have hosted football fans during this tournament, all were mobbed for one of the booziest, most carefree nights the Russian capital has seen in recent memory.

Cars honked their horns and passengers stuck their heads through windows and sunroofs shouting “Ros-Si-Ya!” Police officers looked on what must have been traffic violations with an air of indifference. Nobody was going to be fined, not for the noise, the errant driving or the copious amounts of public drinking that continued late into Monday morning.

It was wild stuff, the kind of night that ends with you rolling on the grass by the Karl Marx statue, clutching a bottle of champagne and somehow entangled inside of your own Russian tricolor flag.

Actually that was just at 9pm.

The celebration was fitting for Russia’s greatest footballing upset, the lowest-ranked squad at the World Cup thought be participating only because the country is hosting the tournament, knocking out one of the heavyweights. Russia’s striker Artem Dzyuba had earlier called it the “match of a lifetime”. One journalist compared it to Rocky.

Having torn down the old footballing deities, the revolutionaries set to erecting their own. “Dzyuba is a God, Piqué is an ass!” one chant on the downtown Moscow streets went. Russia’s goalkeeper Igor Akinfeev looked set for popular canonisation by the time the night was out.

Russia fans knew this was once in a lifetime. They were convinced that the Russia team were carried by strategy and heart over a Spain side that boasted more talent.

“It wasn’t beautiful but that’s not really important. We won!” said Darya Mitrofanova, 26, who had come from a Moscow suburb after the win to parade through the streets of the capital with three friends. “Real women love football,” her T-shirt read.

“There are no words for what I feel right now, just pride for our boys,” said Margarita Avakyan, 57, who had come downtown with her family to watch the celebrations.

Had she ever seen anything like what was happening on Moscow’s streets now? “This is the biggest [celebration] I’ve seen in a long time, maybe ever.”

“You were born to make fairytales a reality,” the Russian banner unfurled by the fans at the match read. It paraphrased a Soviet march that was once the anthem of the anti-air defence forces. Fairytale was a good estimation of their odds. Dmitry Medvedev was at the game; it’s always a bad sign when he shows up instead of Vladimir Putin.

Still the fans came like lambs to the slaughter, a contingent that shouldn’t have believed Russia could beat Spain and largely didn’t. “I’d be lying if I told you that,” said Viktor, a 63-year-old retired from the army who stood downing beers at Luzhniki Stadium with a vista over the Moscow river and the iconic university.

But the fans were spirited. The Russians came in a sea of kitsch: floppy-eared ushankas despite the July heat, striped sailors’ undershirts called telnyashkas, Russian civil war budenovkas, tricolors, stuffed teddy bears. Many had never seen a football match, and cheered at odd moments, such as when Russia took possession in their own half. Russia had not seen a knockout round since the Soviet Union. Many came to Sunday’s match more for the spectacle than the football.

There were some believers. Igor, 41, who wore a hockey jersey, said that he had put money on Russia to win. Asked if that was a smart bet, he replied: “Spain have never won a knockout round against a home side.”

Even going into extra time, many were bracing for a defeat.

Maxim Khorovinnikov, who came with his two sons, said he was blown away after 90 minutes by how well the match was going.

What if Russia lose?

“No problem amigo!” he replied, pointing at his son shirt that said the same. They lived in Spain, he explained.

And yet, here we are. A ripple and then a roar passed through a 78,000 sellout crowd at the Luzhniki Stadium, and as the Russia players stormed the pitch, the noise was so loud it hurt.
Did you touch the man-sized stuffed bear passed halfway round the city by the time dawn came? See that drunk guy hug the cop so hard they both fell over? Muscovites were still going hard long after the sun came up. Is anyone even going to work today?

admin  7:58 SA 02/07/2018
Share:
Brazil 2-0 Mexico: Neymar plays hero & villain in last 16 victory over El Tri
‘We saw shortcomings of England squad’ – Schmeichel on Three Lions’ defeat to Belgium
We are using cookies to give you the best experience on our website. By continuing to browse, you are agreeing to our Cookie Policy.
You did not use the site, Click here to remain logged. Timeout: 60 second