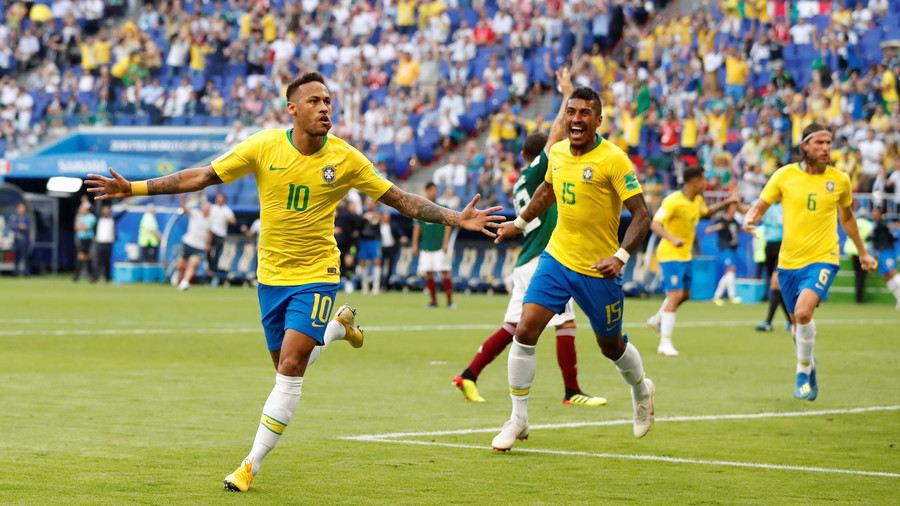 Brazilian number 10 Neymar played the role of hero and villain in the match at Cosmos Arena with his side’s opener on 51 minutes and then provided the assist for substitute Firmino to complete a second-half double that sank Mexico.

However, the striker did also take center stage for his play-acting skills throughout the game, and in particular in reaction to a 'challenge' from Mexico defender Miguel Layun, which drew criticism from fans and fellow pros alike.

When the action got underway in the torrid heat in Samara, the early moments produced end-to-end action that featured an early shot on goal by Neymar that Guillermo Ochoa palmed away.

For Mexico, Carlos Vela proved a constant threat from the left flank, the first evidence of that coming in the shape of a cross-field ball behind the defense to Hirving ‘Chucky’ Lozano. However, the hero in El Tri’s shock 1-0 win over Germany couldn’t maneuver enough space to find the goal and his shot was blocked.

It was the start of some good pressure from Mexico, with Vela again creating danger from the left and crossing the ball into the box to Hector Herrera, who sold a brilliant dummy but his shot was eventually blocked.

It wouldn’t have been unfair to say in a good chunk of the first half that Mexico overran the Brazilians, who retaliated with a combination from Philippe Coutinho and Gabriel Jesus, which resulted in a shot cannoning off Ochoa’s foot. Moments later and Jesus the carved out another chance on his favorite left foot, but Ochoa was equal to it again. Despite the early first-half action, both sides went into the break with the scores level.

admin  12:11 CH 02/07/2018
Share:
Football fans smashed stereotypes about Russia through social media – Putin
A wild night: Russia win and Moscow parties as never before
We are using cookies to give you the best experience on our website. By continuing to browse, you are agreeing to our Cookie Policy.
You did not use the site, Click here to remain logged. Timeout: 60 second