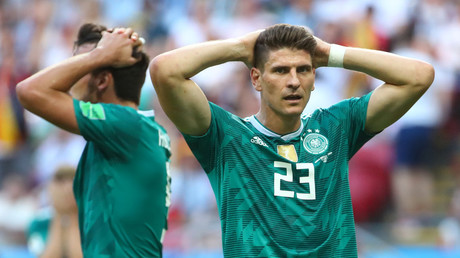 At the beginning of the day’s action on Wednesday, it seemed as though tie-breakers would be needed to decide qualification places in a tight group, but as the Russia 2018 World Cup has already shown, nothing should be taken for granted.

In the end, Sweden stunned Mexico 3-0 in Ekaterinburg in the group’s other match and it was those two nations who progressed in first and second place respectively from Group E, after Germany went down to 93rd and 96th minute goals to South Korea.

“Germany did not deserve anything, the way they have played this tournament has been very bad. The way their preparation games have been, you think ‘well, okay, that’s just preparation’. But they carried that really poor form into the tournament,” Schmeichel told RT host Neil Harvey following the match.

Schmeichel said he believed Die Mannschaft were “lucky” to get three points against Sweden, and that a moment of brilliance from Toni Kroos - a 95th-minute free kick to seal a come from behind 2-1 win - presented them with a “lifeline”.

The Manchester United and Denmark great said some blame must rest on manager Joachim Low, who made wholesale changes to the side since that match with the Scandinavians.

“Joachim Low - who has won the world championship with these boys - what he was thinking? He made five changes to the team against Sweden,” Schmeichel said.

“He is not putting Muller on, Muller came on later, and, you know, when you say is it fair, is it not fair - it is completely fair that Germany are not in this group,” he added.

Germany’s loss confirmed the team became the first national side in the country’s history to be eliminated at the group stage of a World Cup, doing so by finishing in fourth place.

admin  4:55 CH 27/06/2018
Share:
Brazil breeze into last 16 with 2-0 win as Serbia knocked out
‘Speechless’: Germany in disbelief as holders suffer World Cup humiliation
We are using cookies to give you the best experience on our website. By continuing to browse, you are agreeing to our Cookie Policy.
You did not use the site, Click here to remain logged. Timeout: 60 second