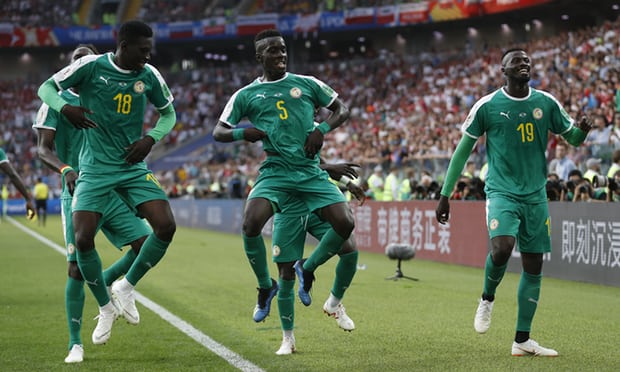 Aliou Cissé broke down in tears in front of his Senegal players a few days ago. The manager had simply been overcome by what it all means for his country to be at a World Cup finals for only the second time in their history.

The first, famously, had been in 2002, when Cissé was the midfield enforcer for the late Bruno Metsu’s team that shocked European champions France and the world in the opening group tie en route to a heartbreaking quarter-final exit against Turkey. No African team have gone further in the competition.

Cissé has felt the weight of history and knows his challenge is to bring those low‑definition images up to date. On a glorious occasion for the Teranga Lions, he got off to the perfect start.

Each of the other four African nations at this World Cup had lost their opening games but Senegal, who are arguably the continent’s most-fancied team, punished a pair of hideous defensive mix-ups from Poland to spark wild scenes among their supporters.

The opening goal was a nightmare for Thiago Cionek, who played instead of the injured first-choice centre‑half, Kamil Glik. Idrissa Gana Gueye’s shot was going wide when he deflected it past his wrong-footed goalkeeper, Wojciech Szcsesny. But the second was a greater calamity.

Grzegorz Krychowiak’s back-pass was dreadfully mis‑hit and, with confusion reigning between Szczesny and the substitute Jan Bednarek, Mbaye Niang nipped in to score. Krychowiak ignited the possibility of a late Poland fightback with a firm header from Kamil Grosicki’s free kick but it never truly looked on. At full-time some of the Senegal players sank to their knees and kissed the turf. For them, hope springs eternal.

Senegal’s plan was to counter-attack and they bristled with pace in wide areas, with Ismaila Sarr on the right of the midfield three and Sadio Mané on the left wing. The left-back Youssouf Sabaly is no slouch, either, and he sparked a moment of excitement in a tight first half when he intercepted, charged forward and released Niang. The centre-forward had Mame Biram Diouf to his right but he dragged a low shot tamely past the far post.

The tie needed a goal and Senegal got it shortly before half-time. It was undercut by good fortune, although Gueye and Senegal will say that they made it for themselves.

Niang muscled the ball from Lukasz Piszczek on the halfway line and he advanced before feeding Mané, who rolled it square to Gueye. The shooting chance opened up. Gueye had Michal Pazdan jumping to block in front of him and his connection was not clean. He dragged it and the ball was heading well wide of Szczesny’s goal when fate intervened. The shot hit Cionek and, with Szczesny wrong-footed, it ricocheted into the middle of the net.

The statistics showed there had been no shots on target in the first half and Poland, in particular, offered nothing as an attacking threat. Adam Nawalka had to do something so he swapped Jakub Blaszczykowski, who won his 100th cap, for Bednarek and switched to a 3-4-3 formation. Bednarek was among the guilty parties for the disastrous second concession.

The danger was minimal when Krychowiak looked to play a ball back to Szczesny from just inside the Senegal half but he got it all wrong, leaving it woefully short. Part two of the breakdown came between Szczesny and Bednarek. The goalkeeper resolved to come out for it and Bednarek hesitated, which allowed Niang in. Presumably, Bednarek had heard a call from his goalkeeper. Niang got to the ball first, which always looked likely, and he flicked it over Szczesny before running on to tap into the empty net.

Poland had cried foul in the first action of the second half when Robert Lewandowski had won the ball and blasted away only to be blocked off by Salif Sané. The covering defender, Moussa Wagué, probably saved his teammate a red card. Sané escaped with yellow and Khadim Ndiaye sprang to his left to keep out Lewandowski’s free kick.

But Poland flattered to deceive in front of thousands of their supporters, who had taken over roughly 60% of the stadium. Krychowiak’s goal was too little, too late. It was a day that belonged to Senegal.

admin  2:56 CH 19/06/2018
Share:
Ronaldo header knocks out Morocco
'They make me look chubby!': England hero Harry Kane on Russian dolls in his image
We are using cookies to give you the best experience on our website. By continuing to browse, you are agreeing to our Cookie Policy.
You did not use the site, Click here to remain logged. Timeout: 60 second