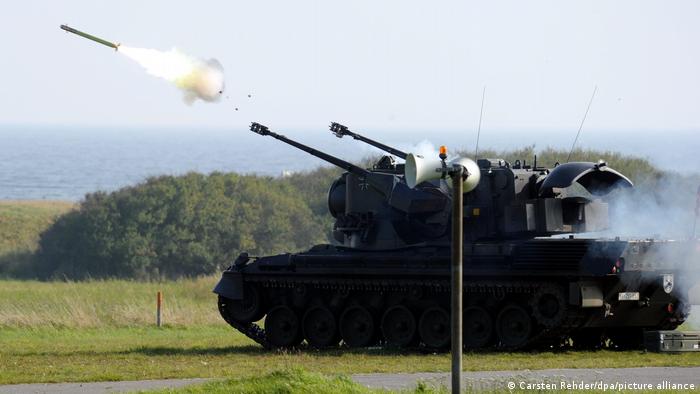 In Germany, the self-propelled anti-aircraft gun "Gepard" was phased out of the Bundeswehr in the early 2010s
After weeks of mounting pressure, the German government will now supply heavy military equipment to Ukraine. DW takes a look at how Berlin's position has changed since the beginning of the war in Ukraine.

The German government on Tuesday confirmed reports that it will approve a delivery of "Gepard" anti-aircraft tanks to Ukraine.

German Defense Minister Christina Lambrecht announced the move during opening remarks at the Ramstein air base in Germany, coming at the start of a US-hosted defense conference on Ukraine.

"Yesterday we decided that Germany will make the delivery of 'Gepard' anti-aircraft tanks possible to Ukraine," Lambrecht said in a transcript of her speech seen by DW. The confirmation came after German media reported on the move.

The "Gepard" anti-aircraft system was developed in the 1960-1970s, but has been upgraded several times with the latest electronics. "The German army has taken them out of use almost a decade ago, not because they were obsolete, but because at that time the Bundeswehr was scaling down and they had no use for it anymore," defense journalist Thomas Wiegold told DW.

In recent weeks, Chancellor Olaf Scholz's government has come under increasing pressure for refusing to ship heavy weapons directly to Ukraine. Critics say his center-left Social Democrats (SPD) are too reluctant to stray from their historic policy of detente toward Moscow.

Why is the announcement so significant?

At the end of January, when Russia had already massed more than 100,000 troops around Ukraine and the US was warning of an imminent invasion, Germany reiterated that it would not send any weapons.

Just days before the helmet announcement, Berlin had not given Estonia permission to send old German howitzers to Ukraine.

"In recent years, the German government has repeatedly decided not to supply lethal weapons. There are reasons for this, which are of course also based on all the developments of recent years and decades," Scholz said at the time.

Following Russia's invasion of Ukraine on February 24, Germany reversed this long-standing policy of not sending weapons to conflict zones, which traced its roots back to the end of World War II, as Scholz announced a "turning point" in German defense policy.

In the aftermath of the invasion, Germany said it would supply Ukraine with 1,000 anti-tank weapons, 500 Stinger surface-to-air missiles, around 2,700 Strela anti-aircraft missiles, as well as ammunition, machine guns, grenades and mines.

Berlin has also approved requests from other countries — including Estonia and the Czech Republic — to send some of their stocks of ex-East German, Soviet-era weapons to Ukraine, including howitzers and armored personnel carriers.

However, the German government still refused all Ukrainian requests to send German-made heavy military equipment. German officials said they would prefer to send Soviet-designed weapons that Ukrainian soldiers could operate without additional training.

According to Wiegold, such supplies are now "becoming limited."

As recently as April 9, German Defense Minister Christine Lambrecht also said that she saw hardly any possibilities left to supply Ukraine with weapons and equipment directly from the German military stockpiles.

'No more taboos' in weapon deliveries

The next major paradigm shift in German politics came in mid-April as Russia prepared for a new offensive in eastern Ukraine.

"Germany has made a decisive decision here to deliver weapons [to Ukraine]. We deliver, we have delivered and we will deliver," German Chancellor Olaf Scholz told German public radio RBB on April 14.

And on April 21, German Foreign Minister Annalena Baerbock told a news conference in Tallinn that "there are no taboos for us with regard to armored vehicles and other weaponry that Ukraine needs."

However, Baerbock said the priority was to ensure Ukraine quickly received older Soviet-designed equipment and that Germany would replenish stocks of allied countries that have such weapons with modern German-made equipment.

According to the media reports, Germany has agreed such an exchange with Slovenia. This country would send a large number of its T-72 Soviet-era battle tanks to Ukraine. Germany would then send Slovenia a number of Marder tanks and Fox wheeled tanks as replacements.