×
Monday - 02/05/2022 14:50
After failing to take the capital Kyiv in the first few weeks of the war, Moscow’s army has refocused on the east of Ukraine with grim results.

Moscow’s army has refocused on the east, notably the Donbas region, which includes Donetsk and Luhansk, after failing to take the capital Kyiv in the first few weeks of the war.

The situation in the town of Lysychansk, which is encircled on three sides by Russian troops, has been described as “grim” by the BBC.

Fighting is particularly intense around Izyum, Lyman and Rubizhne, as the Russians prepare their attack on Severodonetsk, the last easterly city still held by Kyiv, Ukraine’s general staff said.

“The situation in the Luhansk region can be described in a few words — active and heavy fighting continues,” the defence ministry added.

The governor of Luhansk has said he expected more intense battles ahead of May 9, the day Russia celebrates the 1945 surrender of Nazi Germany to allied forces, including the then Soviet Union.

Lyman, a former railway hub known as the “red town” for its red-brick industrial buildings, is expected to be one of the next places to fall after Ukrainian forces withdrew.

Russian forces appeared to have made notable advances around the town, advancing on their positions by several kilometres, an AFP team in the area said Sunday.

Russia has moved to solidify its grip on areas it controls and from Sunday introduced the Russian rouble in the region of Kherson — initially to be used alongside the Ukrainian hryvnia. 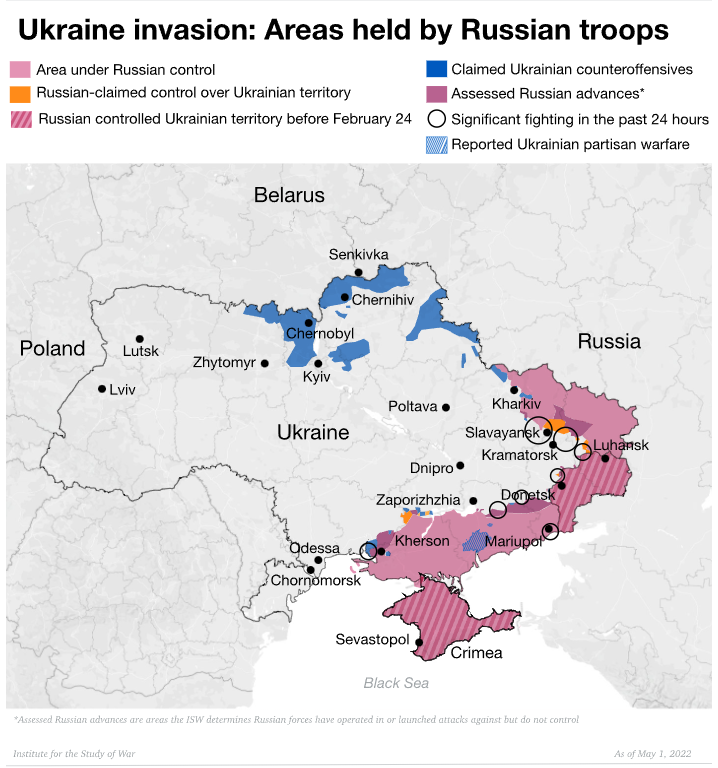 “Beginning May 1, we will move to the rouble zone,” Kirill Stremousov, a civilian and military administrator of Kherson, was cited as saying by Russia’s state news agency RIA Novosti.

He said the hryvnia could be used during a four-month period, but then “we will completely switch to settlements in roubles”.

On the frontline in the east, Russian troops — helped by massive use of artillery — have advanced slowly but steadily.

But Ukrainian forces have also recaptured some territory in recent days, including the village of Ruska Lozova, which evacuees said had been occupied for two months.

“It was two months of terrible fear. Nothing else, a terrible and relentless fear,” Natalia, a 28-year-old evacuee from Ruska Lozova, told AFP after reaching Kharkiv.

Kyiv has admitted that Russian forces have captured a string of villages in the Donbas region and has asked Western powers to deliver more heavy weapons to bolster its defences there.

“Everyone understands that we must guard the line here,” Lieutenant Yevgen Samoylov of the 81st Brigade told AFP as his unit rotated away from the front line near the town of Sviatogirsk.

“We cannot let the enemy move closer. We try to hold it with all our force.” Kyiv said Monday that its drones had sunk two Russian patrol boats near the Black Sea’s Snake Island, which became a symbol of Ukrainian resistance after soldiers there rebuffed Russian demands to surrender.

“The Bayraktars are working,” said Valeriy Zaluzhnyi, the commander in chief of the Ukrainian Armed Forces, in a defence ministry statement, referring to Turkish-made military drones.


NEW: Russia has seen 1/4 of the 120 BTGs sent to Ukraine rendered “combat ineffective” with some of the highest levels of attrition among elite units: UK Defense Intel

Ukrainian authorities were hoping Monday to evacuate more civilians from the besieged southern port city of Mariupol, as Russia’s offensive in the east of Ukraine continued with “active and heavy” fighting.

Kyiv said more than 100 civilians were evacuated over the weekend from the sprawling Azovstal plant, the last holdout of Ukrainian forces in Mariupol which has been surrounded by Russian forces since they invaded Ukraine on February 24.

They were awaited Monday in Ukraine-controlled Zaporizhzhia, where vehicles from UNICEF and other international NGOs were on standby.

In co-ordinated efforts between Ukraine, Russia and the International Committee of the Red Cross (ICRC), another evacuation had been hoped to start first thing on Monday but by lunchtime, there was no sign of movement.

Several hundred Ukrainian soldiers and civilians have been sheltering in the maze of Soviet-era underground tunnels underneath the steelworks, many of whom require medical attention.

“For the first time, there were two days of real ceasefire on this territory. More than 100 civilians have already been evacuated — women and children first of all,” Ukrainian President Volodymyr Zelensky said late Sunday.

The Russian armed forces said 46 civilians had left Azovstal on Saturday, and had “voluntarily” decided to stay in the separatist region of Donetsk.

Another 80 got out on Sunday — of whom 69 left for Kyiv-controlled territory, it said. They were “handed over to UN and ICRC representatives”, the Russian ministry said earlier.

Mariupol is an important strategic hub connecting the Russian-held southern and eastern parts of Ukraine and has seen some of the worst of the fighting.

One Russian news report put the number of civilians still in the plant at more than 500.

Mariupol is an important strategic hub connecting the Russian-held southern and eastern parts of Ukraine and has seen some of the worst of the fighting.

With the Russian siege leaving residents in dire conditions, with little access to food water and medicine, the city has become emblematic of a war that has uprooted more than 13 million people from their homes and killed thousands.

Western powers have sought to up the pressure on Russia as its onslaught on Ukraine drags on, with sources telling AFP Sunday that the European Union will propose a phased-out ban on Russian oil imports as part of its fresh round of sanctions against Moscow.

The European Commission, which draws up sanctions for the EU’s 27 countries, is preparing the text, which could be put to the member states as early as Wednesday, diplomats said.

Several diplomats said the ban on oil was made possible after a policy U-turn by Germany, which had resisted the measure as too disruptive and potentially harmful to its economy.

On Saturday, US Speaker of the House Nancy Pelosi met President Zelensky, becoming the most senior US government official to visit since the war began.

“Do not be bullied by bullies,” she told reporters at a news conference in Rzeszow in southern Poland on Sunday after returning from Ukraine.

“If they are making threats, you cannot back down.” She promised to enact the $33 billion (31 billion euro) arms and support package announced by US President Joe Biden last week.

Russia has been seeking ways to push back against the growing international pressure.

The speaker of the lower house of parliament, Vyacheslav Volodin, suggested Moscow could seize Russia-based assets of countries it deems hostile. “It is fair to take reciprocal measures,” he said.burs-ar/jm