×
Saturday - 19/03/2022 13:36
Russia has a chance to limit the damage by engaging in ‘meaningful’ talks, says Volodymyr Zelenskiy, amid fierce shelling in the south

Ukraine’s president, Volodymyr Zelenskiy, has called urgently for “meaningful and fair” peace talks over Russia’s invasion amid further attacks, including a claim by Moscow that it had used a hypersonic missile for the first time, hitting a depot in the west of the country.

In a video address early on Saturday, Zelenskiy said: “It’s time to meet. Time to talk. It is time to restore territorial integrity and justice for Ukraine. Otherwise Russia’s losses will be so huge that several generations will not be enough to rebound.”

“The war must end,” he added. “Ukraine’s proposals are on the table.”

As the war entered its 24th day, Poland’s prime minister, Mateusz Morawiecki, proposed a total ban on EU trade with Russia, and there was hope of some relief for stricken civilians as Ukrainian authorities said 10 humanitarian corridors had been agreed.

A corridor was said to have been agreed with Russia for the besieged city of Mariupol, although the authorities’ previous efforts to evacuate civilians there under a temporary ceasefire have mostly failed, with both sides blaming each other. Several corridors were also said to have been agreed in Kyiv and in the self-proclaimed republic in Luhansk.

Hours after Zelenskiy’s call for talks, Russia said it had used a hypersonic weapon for the first time, destroying an underground military depot in western Ukraine. Hypersonic missiles are fast enough that they can evade detection by missile defence systems.

Russia’s defence ministry said on Saturday it had destroyed a large underground depot for missiles and aircraft ammunition in the Ivano-Frankivsk region, state media reported.

rdment on Friday. Russia said its forces were “tightening the noose” around the city, where an estimated 80% of the city’s homes have been damaged. 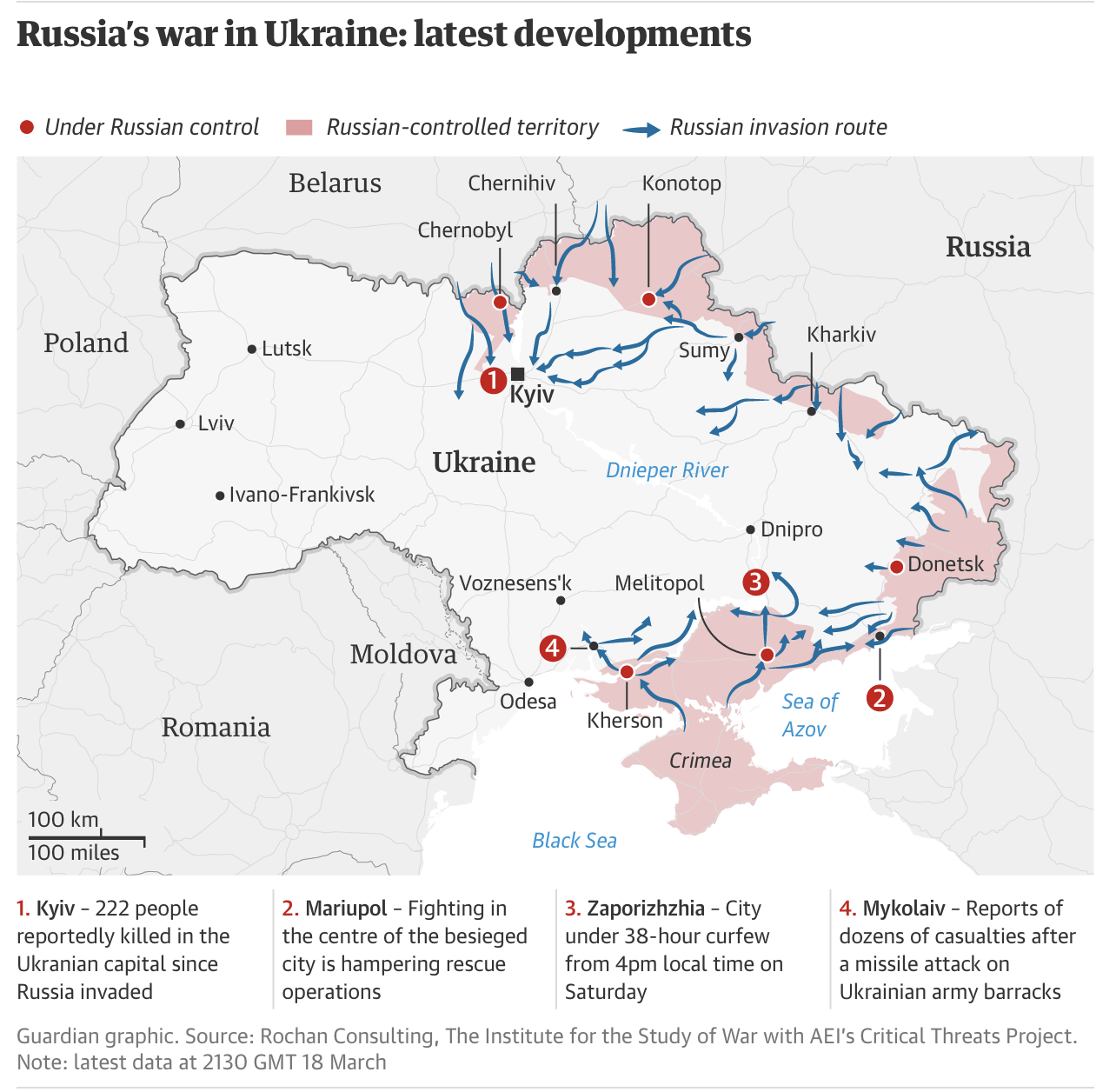 About 9,000 people have managed to flee Mariupol, while work continues to reach the hundreds of civilians believed to be trapped in a shelter under the city’s theatre, which was destroyed by Russian bombing on Wednesday. About 130 people have been rescued from the rubble, some seriously injured. There is no word yet on a death toll.

Zelenskiy said the advance of Russian forces had ground to a halt across Ukraine, a view echoed by western intelligence agencies. The continued targeting of civilians in Mariupol was said by the British military to be a sign of Russia’s failures in the first three weeks of the war.

Lt Gen Jim Hockenhull, the chief of defence intelligence, said: “The Kremlin has so far failed to achieve its original objectives. It has been surprised by the scale and ferocity of Ukrainian resistance, and has been bedevilled with problems of its own making.

“Russian operations have changed. Russia is now pursuing a strategy of attrition. This will involve the reckless and indiscriminate use of firepower. This will result in increased civilian casualties, destruction of Ukrainian infrastructure, and intensify the humanitarian crisis.

“Putin has reinforced his control over Russian domestic media. The Kremlin is attempting to control the narrative, hide operational problems and obscure high Russian casualty numbers from the Russian people.”