×
Wednesday - 02/11/2022 07:42
North and South Korea have fired a number of missiles into waters near each other's coasts in a marked escalation of hostilities.

The North launched its most missiles in a single day - at least 23 - including one that landed less than 60km (37 miles) off the South's city of Sokcho.

The North says the launches are in response to large-scale military exercises current being held by South Korea and the United States, which it calls "aggressive and provocative".

On Tuesday, Pyongyang warned they would pay "the most horrible price in history" if they continued their joint military drills, seen as a veiled threat to use nuclear weapons. The North has tested a record number of missiles this year as tensions have risen.

Wednesday's exchanges began with missile launches by Pyongyang into waters close to South Korea, triggering air raid sirens on Ulleung, an island controlled by Seoul. Residents there were told to evacuate to underground shelters.

One ballistic missile crossed the Northern Limit Line (NLL), a disputed maritime border between the Koreas.

It landed outside South Korea's territorial waters but it's the closest a North Korean missile has come. 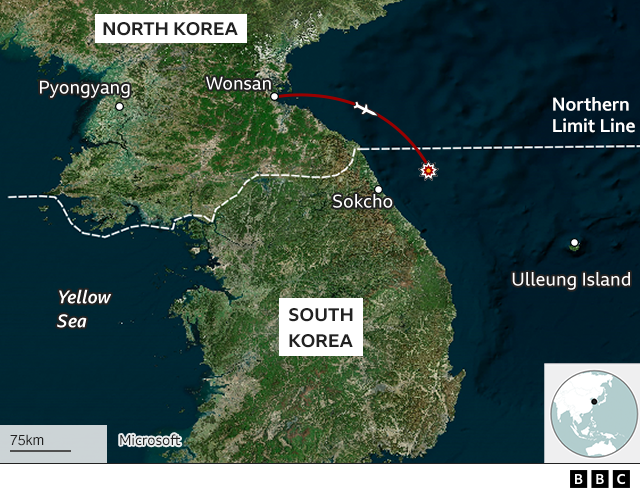 Seoul called it an "unacceptable" breach of its territory.

Officials in the South said the air-to-ground missiles fired by its military landed a similar distance past the NLL off the North's coast.

The tit-for-tat launches come as attention is focused on South Korea during a period of national mourning, following the crowd crush in Seoul at the weekend which killed more than 150 people.

South Korean officials say the missile the North fired over the NLL was one of at least 10 launched by the North in both east and west directions on Wednesday morning. They later updated that figure to 17 and then 23, after the North fired six surface-to-air missiles to the seas east and west of the Korean peninsula.

The missile that came nearest South Korea was launched before 09:00 (00:00 GMT) and landed about 26km south of the de facto border, 57km east of the coastal town of Sokcho and 167km north-west of Ulleung island.

The launch was picked up immediately by South Korean and Japanese authorities, who swiftly condemned the escalation from Pyongyang.

South Korea's military said it was the first time since the division of the Korean peninsula following the 1950-53 Korean War that a ballistic missile had "landed south of the NLL near our territorial sea".

President Yoon Suk-yeol - who has made it his policy to take a tough line on North Korea - labelled it an "effective territorial invasion", although the missile landed outside South Korean territorial waters, vowing a "swift and firm response".

Under international law, countries can only establish territorial claim to 12 nautical miles of sea off their coastline.

Tensions have been rising this year - the peninsula has already witnessed more than 50 missile launches from North Korea in 2022, including one ballistic missile that passed over Japan.

On Monday, a US nuclear-powered submarine arrived off the coast of South Korea to take part in the latest in a series of joint US-South Korean drills, which began in August.

Dubbed "Vigilant Storm", they are the largest exercises Seoul and Washington have ever held, involving hundreds of military aircraft from both sides.