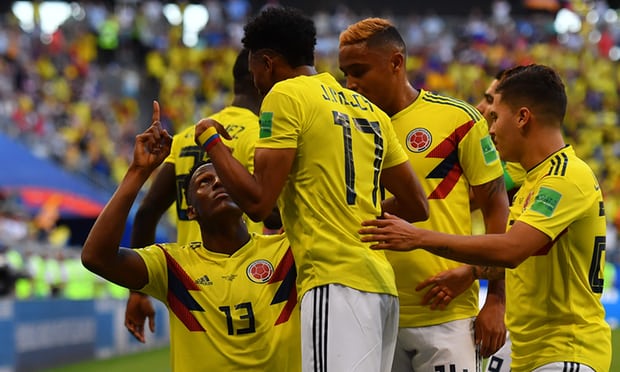 A second-half header from Yerry Mina put Colombia through to the knockout stages of Russia 2018 and sent Senegal home on account of having received more yellow cards than Japan. Defeat left Aliou Cissé’s side level on points and goal difference with Japan but the latter’s lower bookings tally meant they go through in second place from Group G.

Colombia had been second best throughout the first half as they struggled to regain the heights of their emphatic win over Poland but improved after the break and got the breakthrough when Mina met a corner from the right with a thumping header at the near post.

Senegal made three changes with the coach, Aliou Cissé, recalling Cheikhou Kouyaté, who captained the side, while the forward Keita Baldé and the defender Lamine Gassama also started.

Colombia had to win to progress to the knockout stages and the coach José Pekerman made two changes following their 3-0 win over Poland. Abel Aguilar was rested as a precaution after being forced off against Poland due to injury, so Mateus Uribe started and fellow midfielder Carlos Sánchez returned after a one-game ban in place of Wilmar Barrios.

Senegal made the sprightlier start, and their bright opening looked as if it might be rewarded when they were awarded a penalty in the 17th minute by the referee Milorad Mazic after Davinson Sánchez’s challenge on Sadio Mané as the Liverpool forward burst into the penalty area. But the official consulted the VAR, which ruled that Sánchez had won the ball cleanly.

Colombia’s best early chance had come when Juan Quintero’s free-kick was well saved by the Senegal goalkeeper Khadim Ndiaye. Radamel Falcao also headed Juan Quintero’s free-kick wide from close range but their hopes took a jolt when James Rodríguez, who had struggled to get into the game and appeared to be hindered by his calf injury, was withdrawn on the half-hour and replaced by Luis Muriel with the Real Madrid playmaker heading straight down the tunnel looking decidedly unhappy.

admin  12:05 CH 28/06/2018
Share:
‘We saw shortcomings of England squad’ – Schmeichel on Three Lions’ defeat to Belgium
Brazil breeze into last 16 with 2-0 win as Serbia knocked out
We are using cookies to give you the best experience on our website. By continuing to browse, you are agreeing to our Cookie Policy.
You did not use the site, Click here to remain logged. Timeout: 60 second