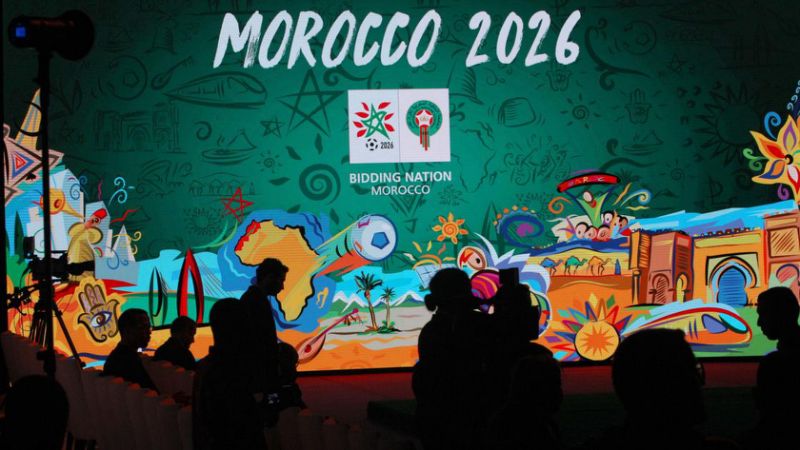 Poland player Glik hopes to be fit for World Cup

MOSCOW (AP) — The Latest on World Cup preparations and meetings of football leaders ahead of the tournament in Russia (all times local):

Injured Poland defender Kamil Glik says he believes doctors in France have given him the "green light" to play in the World Cup but the final decision rests with the national team physician.

Glik, who is one of Poland's pillars, injured his left shoulder during training in Poland last Monday and officials suggested he would not go to Russia, but also that French doctors were to take another look at him.

He was examined in Nice on Monday and said, "I believe I have the green light" to play. He added a decision could come on Tuesday from the team doctor.

FIFA's newest vice president says voters from the Oceania region should be free to make their own choice in Wednesday's vote for the 2026 World Cup host.

The 11 voting federations from the South Pacific was one of six continental groups to meet North American and Morocco bid leaders Monday.

The candidate presentations began minutes after Lambert Maltock was picked as Oceania's new president — giving him status as one of FIFA's eight vice presidents.

Oceania is often viewed as a likely voting bloc in FIFA elections, though Maltock expects to issue no order ahead of the vote by up to 206 FIFA member federations.

The Vanuatu official says: "We prefer that each association will vote according to what he believes."

FIFA says Lambert Maltock of Vanuatu was chosen to lead the 11-member football body for the south Pacific, which is based in New Zealand. He replaces David Chung who resigned amid corruption allegations

Maltock serves the remainder of Chung's term through early 2019. He automatically becomes one of FIFA's eight vice presidents, and joins its 37-member ruling council.

Chung, from Papua new Guinea, was FIFA's senior vice president — technically No. 2 to Gianni Infantino — when he abruptly resigned in April.

FIFA had ordered an investigation into a $20 million construction project at Oceania headquarters in Auckland, New Zealand. Funding to Oceania was cut after an audit found "potential irregularities."

The Asian Football Confederation has agreed to a broadcast rights deal with a Chinese partner, guaranteeing more than $4 billion in income over eight years through 2028.

AFC President Sheikh Salman says the governing body's administration has been "mandated to complete the contract as soon as possible."

The AFC says the deal is with DDMC Sports International of China and Fortis Sports. It includes rights to the Asian Cup and annual Asian Champions League.

It brings more Chinese money into international football after a series of World Cup sponsor deals for FIFA and investments in European clubs.

A DDMC subsidiary, Desports, was an agent bringing Chinese sponsors to FIFA this year.

The previous Asian rights deal was a controversial 8-year agreement awarded without a tender in 2009 by then-AFC president Mohamed Bin Hammam.

An AFC-appointed investigation of Bin Hammam's leadership said its $600 million guaranteed share of the deal was undervalued in favor of rights holder World Sports Group.

More than 50 African voting federations are being urged to show unity as a continent and back Morocco's bid to host the 2026 World Cup.

Liberia, Namibia and Zimbabwe have pledged support in recent weeks for the joint United States-Canada-Mexico candidate. The North Americans have targeted voters in the southern African group known as COSAFA.

The Madagascar official says: "I think there is an obligation to remain within our family. But of course it is an individual choice."

The Morocco and North American bid leaders are meeting voters from five of FIFA's six continental bodies on Monday. Europe's UEFA meets in Moscow on Tuesday.

Morocco football leader Fouzi Lekjaa says he doubts the financial promises made by the rival North American bid to host the 2026 World Cup.

Lekjaa told more than 50 African football federations that "there is lots of uncertainty" in the cash projections of the joint United States-Canada-Mexico bid which presented its plan on stage minutes earlier.

The North American bid predicts $14.3 billion in revenues for FIFA from the 48-team tournament. FIFA's evaluation panel noted that was "significantly higher" than Morocco's predicted income of $7.2 billion.

Lekjaa says in French: "That doesn't correspond either to historical facts or future extrapolation, it's an exercise that goes beyond that."

African countries have 53 of the 206 expected votes in Wednesday's ballot of FIFA member federations.

Under investigation in Ghana for alleged corruption, FIFA Council member Kwesi Nyantakyi has resigned from the world soccer body.

Ahmad tells more than 50 African football federations a special election meeting will be held Sept. 30 in Egypt for them to fill the vacancies.

Candidates will come from the English-speaking group in CAF, the president says.

FIFA's ethics committee suspended the Ghanaian official for 90 days during its investigation.

Leaders of North American and Moroccan bids to host the 2026 World Cup are pitching their plans to FIFA voters.

Both candidates in Wednesday's vote are spending Monday on a busy tour of meetings with continental football bodies. FIFA president Gianni Infantino and secretary general Fatma Samoura are also attending.

More than 50 African football federations are hearing from the bidders at a Moscow hotel.

A few federations — including Liberia, Namibia and Zimbabwe — have pledged to support the joint United States-Canada-Mexico candidacy instead of their Confederation of African Football colleague Morocco.

Voters from North American regional body CONCACAF, Asia and Oceania also have their regional meetings Monday ahead of the election meeting Wednesday.

Keywords: World Cup
admin  11:15 SA 12/06/2018
Share:
8 things to know about the 2018 World Cup
Neymar scores stunner for Brazil as Ronaldo trains in Russia
We are using cookies to give you the best experience on our website. By continuing to browse, you are agreeing to our Cookie Policy.
You did not use the site, Click here to remain logged. Timeout: 60 second