×
Sunday - 13/03/2022 11:33
Attack on facility used for Nato weapons training follows Kremlin warning on arms shipments
Russia has launched its most deadly attack on western Ukraine since the start of the 18-day war, with an air strike on a military base near the Polish border that left 35 people dead.

The assault on the Yavoriv International Centre for Peacekeeping and Security, 30km north-west of Lviv, injured 134 people, according to Maksym Kozytskyi, governor of Lviv region.

He said Russia fired more than 30 missiles, though some were shot down by Ukrainian air defence.

The bombing came a day after Russia’s deputy foreign minister Sergei Ryabkov warned that western arms convoys to Ukraine were a “legitimate military target” for Russia. The US said on Saturday that it would rush up to $200mn in additional small arms, anti-tank and anti-aircraft weapons to Ukraine.

On Sunday in response to the attack US president Joe Biden’s national security adviser Jake Sullivan said the US had “been successful” in getting “substantial amounts of military assistance, weapons, and supplies to the front in Ukraine”.

“We believe that we have a system in place that will allow us to continue to do so, notwithstanding the Russian threat, and we believe that these weapons are making a significant difference in helping Ukrainians defend themselves,” Sullivan told CBS.

Sullivan also reiterated that any Russian attack on a Nato member, including Poland, would trigger a reaction from the alliance. “The president has been clear repeatedly that the United States will work with our allies to defend every inch of Nato territory and that means every inch,” he said.

The Yavoriv centre is a training range where government troops have in recent years conducted joint exercises with forces from the US and other western countries, and where Ukrainian soldiers have been taught how to use anti-tank missiles, launchers and other military hardware delivered to Ukraine by the US.

In response to the attack, a Nato official said: “There are no Nato personnel in Ukraine. Russia’s continued unjustified invasion of Ukraine is provoking untold suffering and destruction. It is condemned by the whole world and must stop.”

“Nato’s core responsibility is to protect and defend all allies. We are reinforcing our collective defence to make sure there is no misunderstanding or miscalculation . . . Nato will defend every inch of allied territory.”

The official added that “Ukraine has the right to self-defence . . . as Ukraine bravely resists the invasion, Nato allies continue to provide support, including military, humanitarian and financial assistance”. 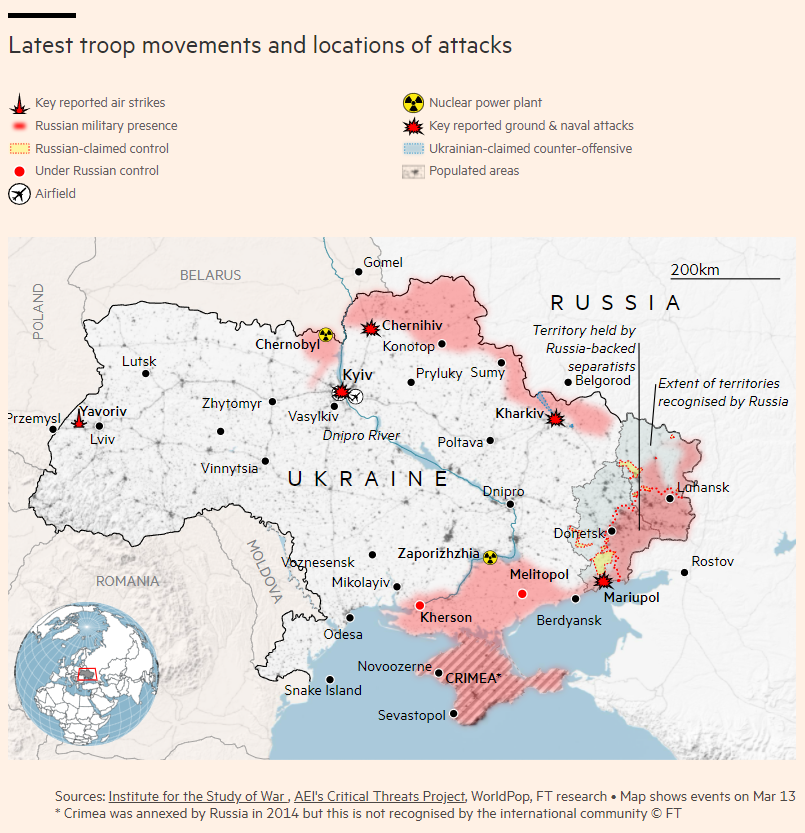 With the war in its third week, Russia is continuing to subject Ukrainian cities to heavy bombardment, trapping thousands of people in shelters and knocking out essential services. Conditions are particularly dire in the port city of Mariupol, which is encircled by Russian troops and where thousands are living without electricity, heating and functioning mobile networks.

“There are reports of looting and violent confrontations among civilians over what little basic supplies remain in the city,” the UN’s Office for the Coordination of Humanitarian Affairs said. “Medicines for life-threatening illnesses are quickly running out, hospitals are only partially functioning, and the food and water are in short supply.”

In a video address to Ukrainians early on Sunday, president Volodymyr Zelensky urged people to continue resisting. “Ukraine will stand the test. We need time and strength to break the military machine that came to our land,” he said.

“I will not underestimate the threat . . . so I say frankly: we still need to hold on. We still have to fight. Every day and every night we must look for ways to cause maximum damage to the enemy,” he said.


The attack in Yavoriv came two days after Russian rockets pounded a military airfield in Lutsk in western Ukraine, in a sign that President Vladimir Putin was widening the scope of his assault on the country.

He called for the creation of a Nato no-fly zone over Ukraine that could deter Russian air attacks. “Action must be taken to stop this,” he said. “Close the sky!”

Officials said Russia had also bombed the airport of Ivano-Frankivsk in western Ukraine. Ruslan Martsinkiv, the city’s mayor, confirmed the attack in a Facebook post.

“According to preliminary information, this morning’s explosions were from an impact on the airport,” Martsinkiv said.

“I remind you that the enemy’s goal is to sow panic and fear. The enemy can and will strike in the rear of Ukraine,” he added.